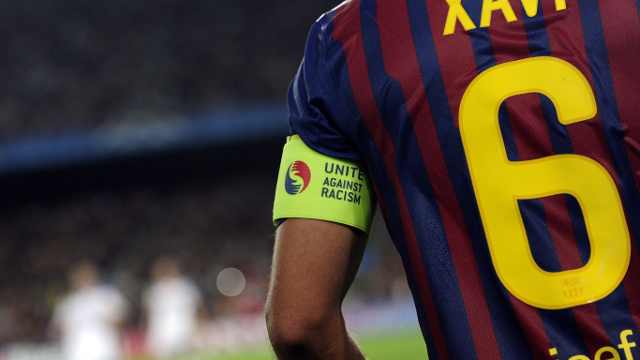 Speaking to beIN Sports, Xavi Hernandez has admitted that he thought Barcelona had the Liga BBVA title wrapped up earlier in the season.

The legendary playmaker has admitted that when Barca faced Real in the Clasico on April 2nd, the title was already a done deal.

“Barcelona already looked like champions,” the Spain international began, when asked about the Clasico, “just by comparing the difference in points with Real Madrid.”

Barca had a 10-point lead over Real heading into the Clasico, an advantage that was cut down to a still-considerable seven after the loss.

A month ago, however, there was a considerable gap between the two sides, with Barca already cruising to the championship. Today, the opposite is in fact the case.

Before their defeat at the hands of Real, Luis Enrique’s side appeared to be cruising towards the Spanish title, but that loss precipitated a decline in form.

Following their slump—and a resurgence in form by both Real and Atletico—only one point separates the three La Liga giants.

Indeed, the race for the title is now nowhere near as clear cut as Xavi once thought it was.

Barca were lacklustre as they saw off ten-men Real Betis on Saturday, while Real and Atletico both kept up with the leaders with victories over Real Sociedad and Rayo Vallecano respectively.

While Barcelona have won their last three matches, they have been unconvincing, and it would be little surprise if either of their rivals from the capital overhaul them.

Laporta could be making a big mistake if this is his first signing of Barcelona’s new era January 22, 2021 8:44
FC Barcelona

Xavi is moving further away from Barcelona and won’t rule out a switch to this Premier League giant December 21, 2020 19:35
Arsenal FC

‘He will end up coaching Barcelona’ – Former team-mate and friend says Xavi has the DNA for top job at the Camp Nou December 15, 2020 11:16
FC Barcelona

‘Messi wants him’ – Xavi tipped to take over from Setien in Barcelona reshuffle July 8, 2020 7:46
FC Barcelona

‘A dream to return to Barcelona’ – Legendary former player opens the doors to a Camp Nou switch April 14, 2020 11:38
FC Barcelona