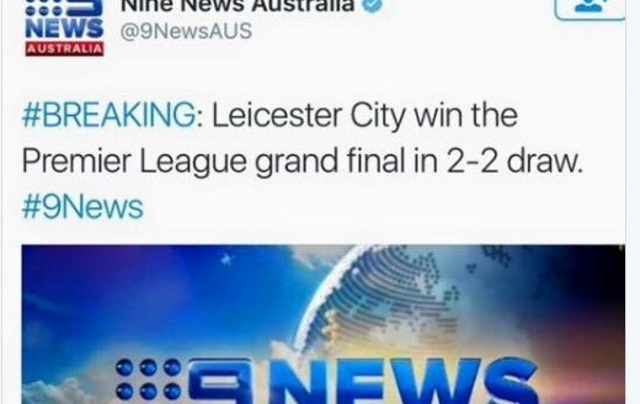 Leicester City‘s unlikely Premier League triumph was celebrated across the globe on Monday evening, when Chelsea’s 2-2 draw with Tottenham Hotspur confirmed the Foxes as champions.

The astonishing title race looked set to continue to the penultimate weekend when Spurs raced into an unlikely two-goal lead at Stamford Bridge following goals from Harry Kane and Son Heung-min.

However, Chelsea fought back in the second half and took a point from the ill-tempered contest after goals from Gary Cahill and Eden Hazard.

The draw secured Leicester’s historic victory, and prompted jubilation in the East Midlands and prompted headlines across the world.

However, it seems as though not everyone managed to quite capture the reality of the narrative, with Australian outlet Nine News Australia particularly guilty!

As shared by ESPN’s Mark Donaldson with this pair of screen shares, the Australian outlet initially described Leicester’s triumph as coming following a 2-2 draw in the ‘grand final’.

So Leicester win the Grand Final, then, in the correction from @9NewsAUS, Chelsea beat Spurs. Third time lucky?? pic.twitter.com/ieYyAhekue

If there was a ‘grand final’, we certainly missed it.

Perhaps then correcting their mistake, following a quick refresh of how leagues work, 9NewsAUS—again using the ‘BREAKING’ intro, suggested that Leicester were crowned EPL champions after Chelsea ‘defeated’ second-placed Tottenham.