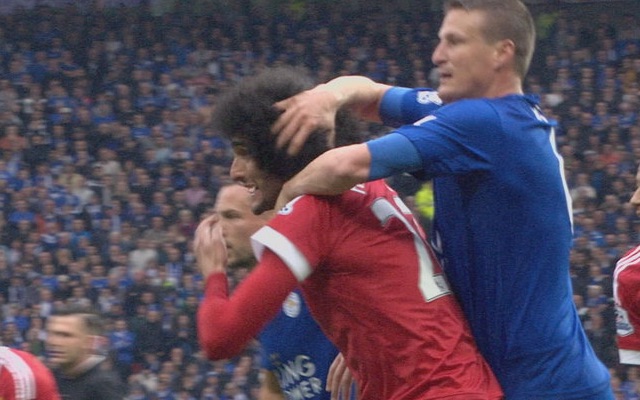 The FA have this afternoon set an interesting precedent by banning both Leicester City defender Robert Huth and Manchester United midfielder Marouane Fellaini for three games.

An incident last Sunday saw Fellaini strike Huth with his elbow, after the Foxes centre-back had antagonised him by pulling his hair.

So, it seems that hair-pulling and elbowing are equal offences, in the eyes of the Football Association. Is that correct?

Huth’s suspension will see him miss champions Leicester’s now-meaningless final two games of this season – at home to Southampton and away at Chelsea, as well as the first Premier League game of next season.

The German will not be banned for August’s Community Shield at Wembley, however, as this is not deemed an official fixture.

Fellaini’s Premier League season is over. His three-game ban sees him ruled out for the upcoming clashes with Norwich City, West Ham United and Bournemouth.

The former Everton giant will be back available for the FA Cup final against Crystal Palace on May 21, though.

If United beat Palace in the end-of-season showpiece, Fellaini and Huth could again go head-to-head in the Community Shield.