The football world was rocked by the news of Patrick Ekeng‘s tragic passing on Friday evening.

The Cameroon international collapsed to the turf only seven minutes after coming on as a 62nd-minute substitute during Dinamo Bucharest’s 3-3 draw with Viitorul on Friday evening.

The club from the Romanian capital were leading their visitors 3-2 when the 26-year-old midfielder collapsed to the turf. 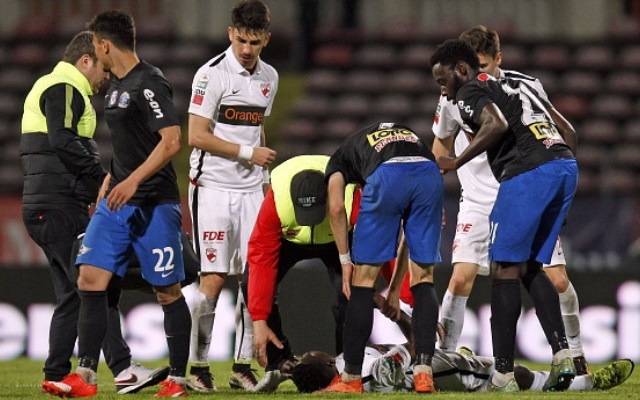 While the referee appeared to recognise the severity of the situation immediately, it took a while before an ambulance was finally brought onto the pitch, and while Ekeng was taken to the Floreasca Emergency Hospital [Associated Press via Daily Mail], doctors were unsuccessful in trying to revive him.

Yaounde-born Ekeng began his career with Cameroonian heavyweights and three-time African champions Canon, before moving to Le Mans in 2009.

He cultivated his craft in France, and moved to Switzerland and Lausanne-Sport for a brief spell in 2013.

In the summer of 2014 he moved to Cordoba FC—recently promoted to La Liga—but was unable to help the Caliphs avoid the drop and left the club for Romania at the season’s end.

The tenacious midfielder represented Cameroon in the final of the African Youth Championship 2009—an unsuccessful showing against a Ghana side featuring Andre Ayew of Swansea City—and also featured in the U-20 World Cup later that year alongside the likes of Jacques Zoua and Charley Fomen.

He made his Cameroon debut ahead of the 2015 Africa Cup of Nations, and was named in the Indomitable Lions’ 23-man squad, but didn’t feature in the tournament itself.

Ekeng’s death comes 13 years after another Cameroonian defensive midfielder—Marc-Vivien Foe—died after a cardiac arrest while in action for the national side.