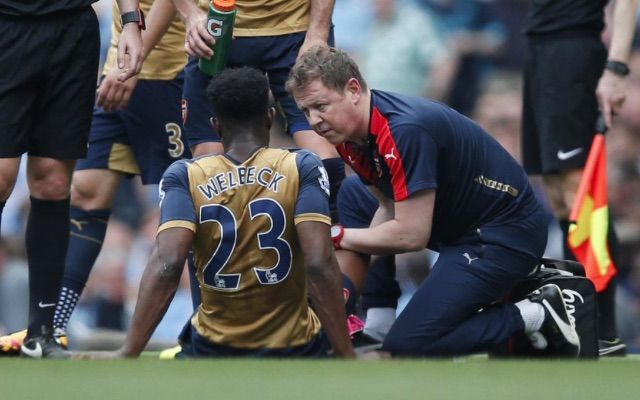 A spot might just have opened up in England’s Euro 2016 squad.

Arsenal forward Danny Welbeck could be the unfortunate casualty. The 25-year-old limped off 24 minutes into the Gunners’ 2-2 draw with Manchester City at the Etihad Stadium this afternoon.

Arsene Wenger is quoted by the Premier League’s official Twitter page as saying after the game: “I’m worried. We’ll try and be optimistic and wait for the scan tomorrow.”

Telegraph reporter James Ducker reports via Twitter that Wenger later added he fears Welbeck has torn his lateral meniscus in his knee, which would rule him out of the Euros.

That would be a huge blow to the former Manchester United striker, who has recently made an impressive return from injury to reestablish himself for club and country.

Welbeck would have been a certainty in Roy Hodgson’s squad for the finals in France. He has scored 14 goals in his last 29 caps to become a favourite of the England manager.

Hodgson will now be scouring the Premier League for a potential replacement. He should look no further than Welbeck’s old stomping ground for a player who can fill his shoes.

Marcus Rashford has trod much of the same path that Welbeck did. Both played for local club Fletcher Moss Rangers before graduating through the academy at Old Trafford.

Welbeck has moved on to Arsenal, and now 18-year-old Rashford is providing the same energy, pace and clever movement that his predecessor had once done for the Red Devils.

And, crucially, the teenager is showing a eye for goal that Welbeck never has on a consistent basis. Seven in 16 matches is a fantastic return for a striker of his youth and inexperience.

That inexperience should not deter Hodgson from picking the youngster. He has displayed a fearlessness which suggests that he will not be intimidated by international football.

There is no urgent need for Rashford, yet to be capped by England’s Under-21s, to be fast-tracked into the senior fold, but this opportunity comes at the perfect time for him.

And if Rashford does not come off, so what? Harry Kane, Jamie Vardy, Wayne Rooney and Daniel Sturridge are all likely to be in the squad to take the pressure off him.

He is an unknown quantity around Europe, capable of playing down the left or through the middle, as Welbeck is, and is full of confidence. Hodgson should take this gamble.