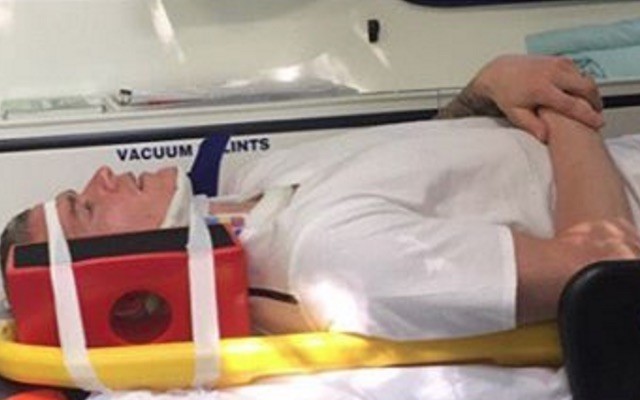 Ex-Reds and England man very lucky to be alive after destroying Mercedes in scary smash.

Leicester City left-back Paul Konchesky miraculously escaped with just cuts and bruises, despite writing off his sports car on Sunday.

A mere 24 hours after watching his parent club lift the Premier League trophy, the former Liverpool and England baller, who has spent this season out on loan at QPR, was taken to hospital in a neck brace as a precaution.

The 34-year-old had been at the wheel in a countryside crash, in which nobody was seriously hurt.

Well what a day…. Someone up there was watching over my hubby today, maybe my uncle Dave….. He has walked away from a&e after this bad car crash today with a few cuts and bruises, no broken bones it's a miracle ???????? get well soon @paulkonch love u ??

Konchesky, who played 15 Premier League games for Liverpool during the 2010-11 season, is out of contract this summer.

His other former clubs include Charlton, Tottenham, West Ham and Fulham, with whom he reached the Europa League final in 2010.

Konchesky was a regular for Leicester when they won the Championship in 2014. And he played 26 Premier League games for the Foxes last season, before losing his place to summer signing Christian Fuchs.