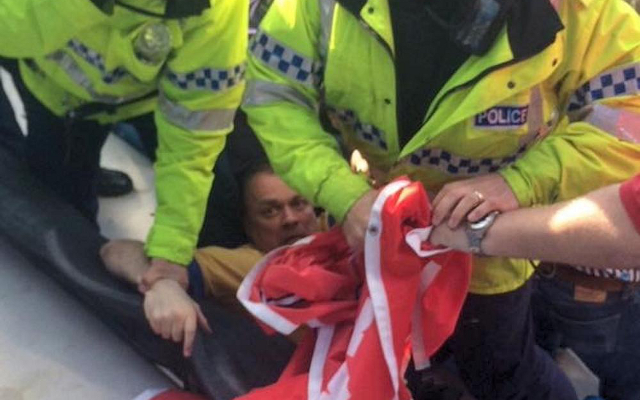 Arsenal supporter Frank Graham has revealed that he is ready to turn his back on the club after his protests on Sunday led to unsavoury scenes.

Graham has been supporting the Gunners for 40 years, but fears over his own safety and that of his son have led him to take drastic action after being involved in an altercation at the Etihad on Sunday.

After unveiling a banner showing his discontent with Arsene Wenger, a fellow supporter attempted to pull it down which ultimately led to the intervention of police officers, as reported by The Sun.

Graham then alleges that they forcefully pushed him into a wall on the concourse, thus leading to his bruised face, and has argued that he has the right to voice his opinion after respectfully doing so and after supporting his team during the game itself.

Given the manner in which he carried out his protest coupled with the fact that the banner itself wasn’t even offensive, it is unfortunate to see scenes such as these at games.

However, doing so at a game where others will naturally disagree with his opinion opens the door for trouble, and it will continue to lead to arguments and conflicts within groups of Arsenal supporters at home or away.

While every fan has the right to have their opinion on the current situation at the club, it remains to be seen whether or not Wenger and the hierarchy act this summer to ensure that everyone is on side and pulling in the same direction.

The French tactician is likely to remain in charge despite calls for him to walk away, and should he finally take the necessary steps to get Arsenal back competing at the top of the table and in Europe, then perhaps incidents such as those involving Graham will slowly dissipate.

Given that has been the case for several years now, many won’t hold their breath over it. However, there is an argument that protests are making little difference and are causing more avoidable issues with the decisions within the club having already been made.