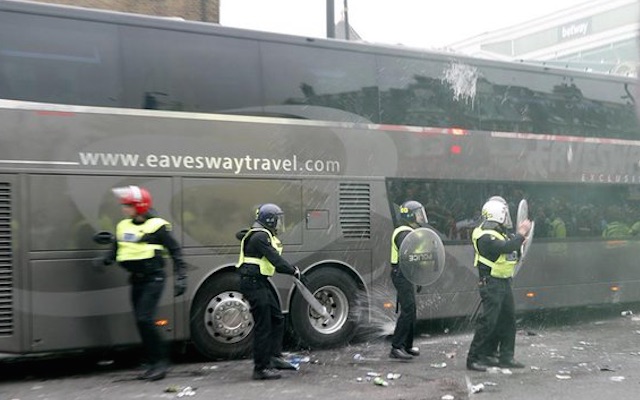 You’ve got to hand it to Manchester United’s players; they have a sense of humour.

Their arrival as the last ever visiting team for a match at the Boleyn Ground tonight was delayed by an hour as their team coach was being pelted by West Ham United fans throwing bottles.

Surrounded by thousands of passionate and emotional Hammers on Green Street is a pretty frightening situation, but the United boys made light of it, as you can see from this on-coach footage.

Midfielder Jesse Lingard seems to be the architect behind the parody video, in which several members of the Red Devils squad fake panic to hilarious affect. We reckon a few were genuinely scared!

Some take cover in the aisle, and others scream sarcastically for their mum!

The moment Manchester United’s team bus was under attack… Video from the inside! pic.twitter.com/uIH1yDOyKa

Michael Carrick, Adnan Januzaj, Phil Jones and Anthony Martial all got involved in the fun and games, but unfazed youngster Cameron Borthwick-Jackson was too busy doing his own thing to take notice!

On the pitch, it has been less of a laughing matter for Louis van Gaal’s boys so far. Diafra Sakho’s deflected strike means that they trail 1-0 at half time in a crucial Premier League clash.