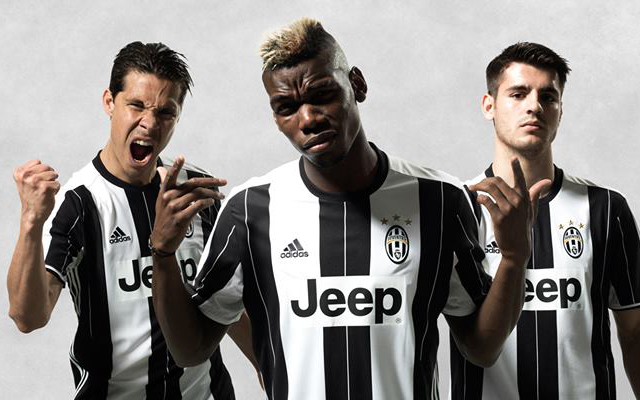 Juventus have unveiled their new home strip that they will wear in the 2016/17 season as they aim for a sixth consecutive Serie A title.

The Bianconeri will lift the Scudetto on Saturday evening, as Massimiliano Allegri’s side will celebrate an incredible year in which they looked as though they would falter.

After a disastrous start to the campaign, the Turin giants went from bottom half of the table mediocrity to champions with a run of form that saw them win 25 of 26 league games from October to May.

While they fell short in Europe, they have a chance of completing a domestic double next weekend when they face AC Milan in the Coppa Italia final.

Nevertheless, plans are already being put in place for next season, as they unveiled their new home kit with Paul Pogba, Hernanes and Alvaro Morata showing off the new threads.

While the choice of players was questionable considering Hernanes isn’t one of the more popular members of the squad while Morata could be set to leave this summer, the kit itself has drawn a mixed reaction on social media.

From those that believe it looks great to others who question it’s similarity to the likes of Udinese and Newcastle United, the move away from the heavy striped tops was naturally going to cause debate.

Regardless, what matters is whether the squad are able to continue to be successful next year, and with their ambitious plans for the summer transfer market, few will doubt their credentials.