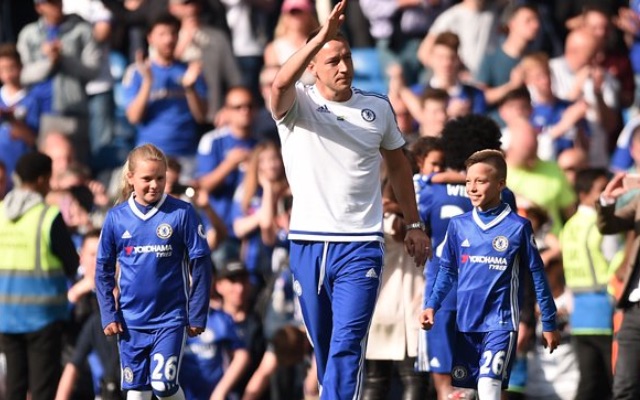 If this isn’t thank-you and goodbye, then I don’t know what is.

John Terry was awarded a special farewell by his Chelsea teammates after their final-day draw with Leicester City, which the 35-year-old defender missed through suspension.

Those Blues players who did play at Stamford Bridge lifted Terry onto their shoulders and threw him up in the air in front of his adoring fans. The skipper seemed to be enjoying it!

If this is the end, thank you John Terry. #CFC https://t.co/nLQPrWgZIE

Terry also gave an emotional speech to the home supporters after full time. He was offered a new contract by the club this week, but why the need for such tributes if he was staying?

The former England captain told the Stamford Bridge crowd that he wants to stay, but he would not have entertained such an obvious send-off if he knew in his heart that he was not leaving.

Terry has made 703 appearances for Chelsea, lifting four Premier League titles He has also won five FA Cup, three League Cups, the Europa League and the Champions League. This is goodbye.