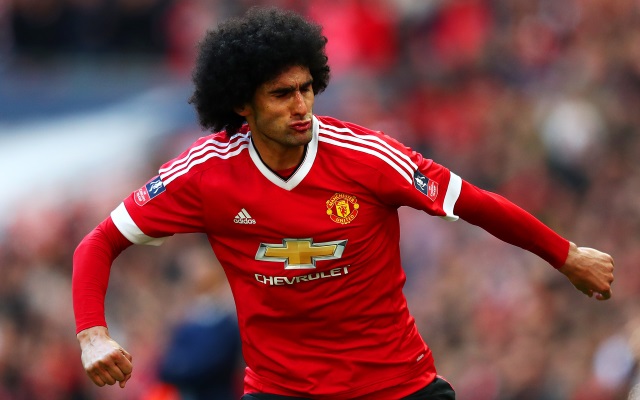 Marouane Fellaini faces missing out on Saturday’s FA Cup final against Crystal Palace despite his crucial role in helping Manchester United get to Wembley, according to The Sun.

The Sun understands that Van Gaal told players in the dressing room after their win over the Cherries, which Fellaini sat out through suspension, that they would play in the final.

That means disappointment for Fellaini, who scored in the semi-final victory over Everton, and the winner as the Red Devils edged past West Ham United in a last-eight replay.

So it appears as though his elbow on Leicester City defender Robert Huth, for which he was punished with an FA violent conduct charge, could cost him more than a three-match ban.

In the absence of his Belgian battering ram, Van Gaal will unleash the speedy attacking trio of Jesse Lingard, Anthony Martial and Marcus Rashford, and play Wayne Rooney in midfield.

Palace’s Damien Delaney and Scott Dann are old-fashioned defenders who would arguably be more comfortable with an aerial duel than they would a footrace against Martial & co.