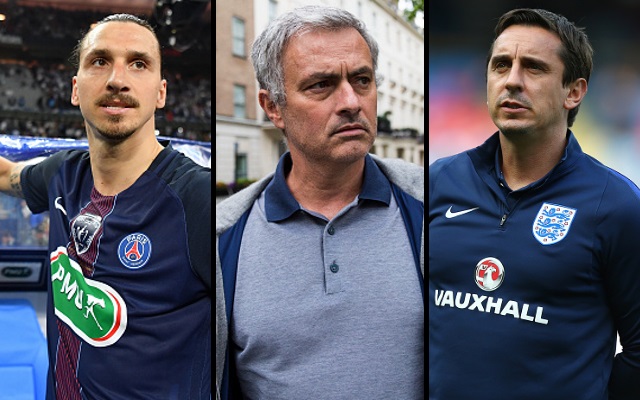 The Red Devils parted ways with Louis van Gaal on Monday following a miserable season in the top flight, as the north-west giants failed to return to the Champions League.

Mourinho is already the hot favourite to take the job, with various outlets reporting that the ex-Chelsea boss’s arrival at Old Trafford is already a done deal.

On Sunday, Paris Saint-Germain great Zlatan Ibrahimovic—who left the French champions after top scoring in Ligue 1 this season—was linked to the No. 2 job at Old Trafford by the Swedish media.

Two more figures have since been linked with a possible switch to the club, in light of the expected departure of current assistant manager Ryan Giggs.

Ex-Valencia coach and current England assistant Gary Neville—who spent 19 years in the Red Devils’ first team—has been tipped for an unexpected return to United alongside Mourinho.

The Express report that the former Chelsea boss sees Neville as the ideal dressing room ally as he looks to get the squad back onside.

Similarly, Mourinho is understood to be considering Manchester City No. 2 Brian Kidd, who has worked alongside Manuel Pellegrini for the last three years, according to The Sun.

The 66-year-old, who made over 200 league appearances for the Red Devils during his playing career, winning the European Cup with United in 1968, could be the ideal man to help Mourinho get the most out of the club’s talented youngsters.