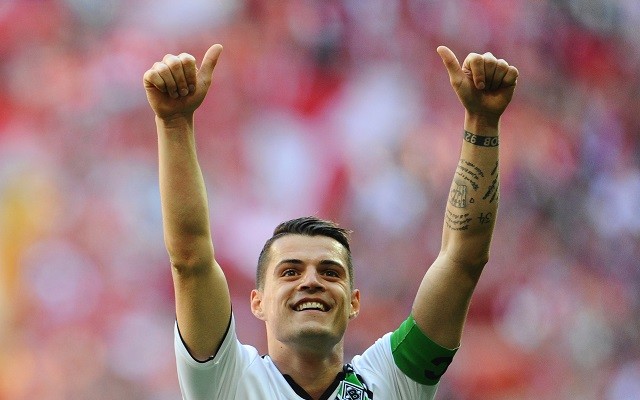 Granit Xhaka has been at Arsenal for a day and already he is the the target of opposition fans.

To be fair, the Swiss midfielder, who has joined Arsenal for around £30m from Borussia Monchengladbach, has not helped himself with his incredibly cringey opening remarks as a Gooner.

In an attempt to prove that he is a leader – something which title-botting Arsenal are in desperate need of – Xhaka recounted a story from his childhood which most definitely flatters to deceive.

This guy gets it. Make sure you watch #GunnerGranit‘s first @Arsenal interview right here: https://t.co/sJA0VyyA7V pic.twitter.com/9GAc5i8vA0

It is hardly William Wallace leading his army into the Battle of Stirling Bridge, and rival fans from Tottenham Hotspur and Manchester United quickly poked fun at Xhaka’s so-called leadership.

It’s alright, Xhaka was once given the keys to his house by his mam so he’s a leader. https://t.co/9IQmSnkTAx

@Arsenal
12 – Number of keys that given by Xhaka parents. The highest since 2012/13 season. Leadership.

‘Here’s the keys if you go out the house son. I’m giving them to you not your brother because you’re a born leader.’ https://t.co/2caZUFCdj0

Xhaka family get together:

‘Hey, bruv, remember how even though you’re older i got the key’

‘WE ALL REMEMBER THE KEY STORY, GRANIT’

Granit Xhaka will lead that Arsenal midfield because he used to get the key off his parents when he was younger. Inspirational leader.

Wenger: S’il vous plait tell me what age you got a house key.

W: You shall be captain, Xhaka. pic.twitter.com/f8ia69Wbcw