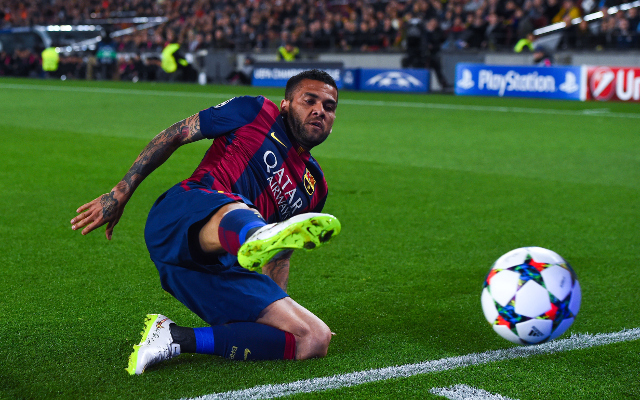 There have been rumours that Barcelona super defender Dani Alves is preparing a move to Serie A. But not only have those reports just been refuted, the door has actually been opened for the Brazilian superstar to join a Premier League outfit.

According to Sun Sport, Alves’ agent Dinorah Santa Ana da Silva has denied recent reports that the Barcelona right back has signed a deal with Juventus and is still listening to offers from Turkey, France and “one English club.”

“It’s not true that there is an agreement (with Juve),” da Silva said.

“Dani has not completed any deal with anyone and right now he is in Brazil and is only exclusively concerned with doing good things with the national team.

“It’s true that I’ve met with Juventus but not just with them.

“I have met with two Turkish clubs, one English club and another one in France but there is no offer and we have nothing to evaluate.”

Alves has averaged over 48 total appearances per year since making the switch from Sevilla to Barcelona in 2008. In eight seasons with Barcelona he has won the Champions League title three times, as well as six La Liga titles and another eight Spanish cups.

It’s interesting to speculate as to which English club it might be. At 33 years old and with an entire career’s worth of Champions League experience, one might think he would only be listening to offers from another Champions League contender or a iconic club.  Man City and Arsenal would fit the bill in both categories while Man United would also seem attractive to a veteran like Alves.