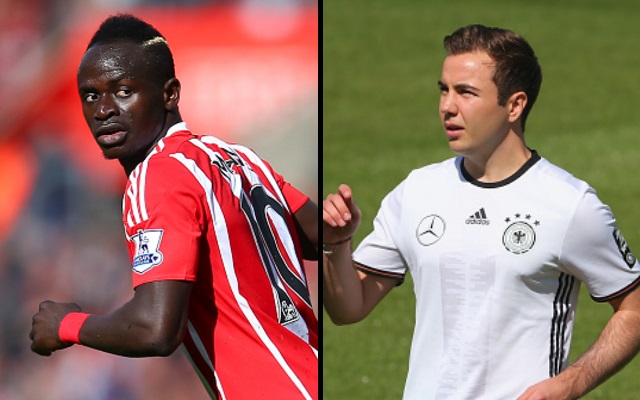 Liverpool are understood to be contemplating a move for Southampton‘s Sadio Mane as Mario Gotze stalls on a switch to Anfield.

Gotze has been  heavily linked with a switch to Merseyside in recent weeks and months, but according to The Guardian, the Reds’ confidence in signing the playmaker has been dented over the last seven days.

The attacking midfielder has endured a tricky career at Bayern Munich—with injuries limiting the 23-year-old to 11 Bundesliga starts this season—but the player surely still has the class to make a major difference to Liverpool’s attacking threat.

The fact that Gotze also worked with coach Jurgen Klopp during their time together at Borussia Dortmund could also have been a factor in his potential move to Liverpool, but now appears to be irrelevant as he appears to look to a future in Bavaria.

The Guardian report that Liverpool are turning their attentions to Mane instead, with the Senegal international clearly impressing the Reds’ hierarchy with his 11 goals and six assists in the Premier League this season.

However, the Merseyside giants face competition for the forward’s signature, with The Sun reporting last week that Manchester United were confident they could complete a £25 million deal to take the West African to Old Trafford.