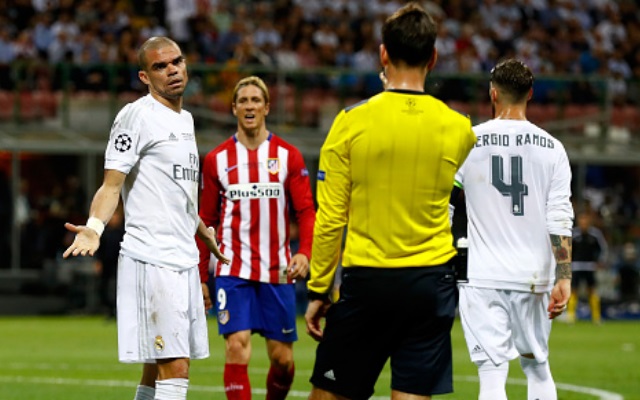 Los Merengues took an early lead through Sergio Ramos, but the tide turned in Atleti’s favour during the second period, and Yannick Carrasco—arguably the game’s outstanding individual—levelled the bout 11 minutes from the final whistle.

There was nothing to separate the two rivals during extra time—as both sides began to tire—and while the first seven takers hit their spotkicks, Juanfran sent his unconvincing effort against the post before Cristiano Ronaldo slammed home the winner.

While CR7’s topless celebration will naturally steal the headlines across the world, another image arguably marred the final for many viewers.

Pepe seemingly sought to hit the ground and tumble around at the slightest provocation, as demonstrated by the clip above, which shows the Portuguese defender overacting after the slightest altercation with Filipe Luis.

Mark Clattenburg was clearly unimpressed with the centre-back—who saw yellow during the course of the contest—and Pepe’s performance marred a final that was, otherwise, largely well contested.