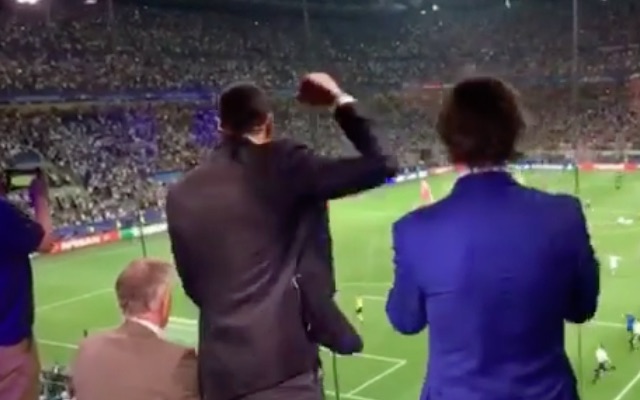 Rio Ferdinand must have been insufferable to work with last night.

The former Manchester United defender – once a teammate of Cristiano Ronaldo – was on duty for BT Sport during the Champions League final.

And, as soon as it became clear than Ronny had the chance to win the game with the decisive penalty kick in the shootout, Rio went into full fan-boy mode.

Fellow pundit Steve McManaman also celebrated as Ronny successfully converted, but he has an excuse.

Macca used to play for Real, but even he didn’t go off on one like a kid who had ODed on Haribo.

And Rio wasn’t finished there with his CR7 worship.

He posted the video to his Instagram account on Sunday afternoon, along with a long testimonial reminding us again that he is Ronny’s mate and that the Portuguese icon in such a terrific bloke.

When you are as committed to working as hard as @cristiano does to do what he does year in year out at the highest level you deserve some fortune/luck…..he didn't have his finest 120mins in a #realmadrid shirt but he got the fortune to be the man with the opportunity to score the winning penalty….i was always told as a kid – you work hard, you get lucky! Lucky is to get the opportunity to take the winning pen, after that it's down to nerve, technique & composure….game won! #HalaMadrid #Ronaldo #UCL