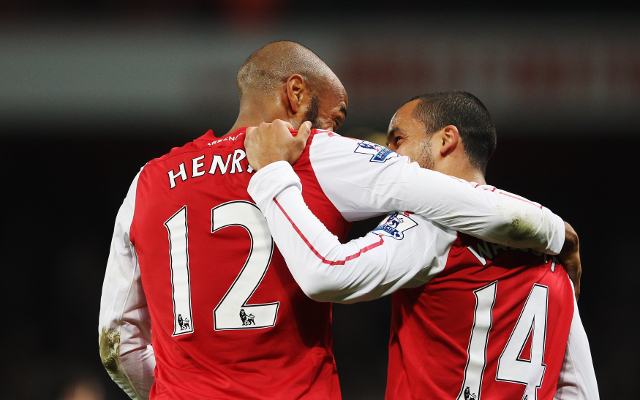 Former Arsenal striker Thierry Henry has revealed his belief that Theo Walcott’s position should be clear by now, but ultimately it’s not.

The 27-year-old suffered disappointment earlier this month after it was revealed that he hadn’t been selected in Roy Hodgson’s provisional England squad for Euro 2016 this summer.

It comes after Walcott scored just nine goals in all competitions this past season, along with seven assists in 42 appearances.

For a player with his qualities and with the expectations on his shoulders to develop and become a key part of Arsene Wenger’s squad, it was certainly another disappointing campaign.

Henry doesn’t believe that the England international has yet to establish himself in a specific position, and coupled with the likes of Alex Oxlade-Chamberlain and Danny Welbeck being out this year with injuries, the fact that Walcott has failed to make Hodgson’s squad with his displays this season is an even bigger disappointment.

“He has struggled,” said Henry, as reported by ESPN FC. “His 10 years at Arsenal have been a weird one. Apart from one season where he played more than 30 games, he wasn’t really a starter. If Welbeck is out and Oxlade-Chamberlain is out, we all know how important pace is in the way [England manager Roy] Hodgson wants to play.

“If you go, you have to have performed. I always have a mixed reaction, Theo Walcott has been in the game for 10 years, you should know about him. You always have something to prove, he should know what he can offer to a team.

“By now he should know what his position is, but it is not clear.”

Walcott’s pace, finishing ability and versatility make him a potentially crucial squad member, but as his career continues to stall and as he continues to fail to reach the heady heights that many expected of him, that is likely what he will be restricted to in the coming years unless he unlocks his full potential to become a leading star in this Arsenal squad.

A move elsewhere may be required to see him make that step up, but it remains to be seen whether or not Wenger will be ready to quit on him after so long. The Frenchman is expected to bolster his options up front this summer, which could in turn make it even more difficult for Walcott at the Emirates in the coming years.