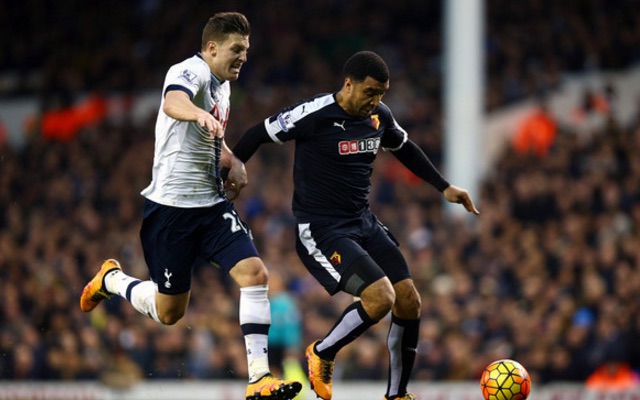 Tottenham have been linked with a summer move for Troy Deeney and, while the news is unlikely to get Spurs fans doing cartwheels, the Watford star would actually be a shrewd signing.

Deeney is just one of many attacking options Tottenham are looking at, according to The Sun, who describe the potential deal as a “shock swoop”.

But it wouldn’t really be shocking. In fact, Deeney seems to tick all the boxes.

For one, the 27-year-old Englishman is powerful and a tireless worker – just the type of player that Mauricio Pochettino, who demands that his forwards press their opponents, likes.

Deeney is also tactically versatile. He has both led the line for Watford and played as a deep no.10 behind Odion Ighalo. This is just what Spurs require – someone who can come in for Harry Kane when Tottenham’s main man is injured or tired, but also play with him when Pochettino feels the need.

For all of their brilliance this season, Spurs lacked a Plan B. When they were behind or trying to turn one point into three, they were unable to switch to two up top, because they didn’t have two!

Against West Brom in April, Pochettino had so little faith in the two midfielders he occasionally pretended were strikers that he waited until the 85th and 87th minutes respectively to introduce Heung-Min Son and Nacer Chadli into his attack.

Had Deeney been on the bench that night, he would have been thrown on way before then and could well have kept Spurs in the title race.

Nevertheless, Spurs will almost certainly continue with 4-2-3-1 in general next season. And Deeney – although an excellent squad option – is not good enough to start regularly in that formation.

Ultimately, his suitability for Spurs will come down to whether or not he is willing to go from captaining Watford to playing the role of a back-up in a side with title aspirations and Champions League football.