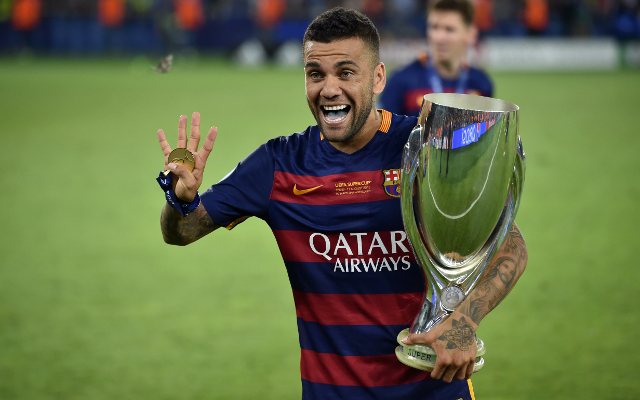 Barcelona have confirmed that Dani Alves will leave this summer, but have vowed to keep hold of Neymar and Javier Mascherano.

As Sky Sports reported, both Alves and Mascherano have been strongly linked to Juventus.

Alves, also a target of Paris Saint-Germain according to Sky Sports, will be allowed to depart the Camp Nou because of personal reasons.

Barca sporting director Robert Fernandez respects the Brazilian’s wishes and is confident that Luis Enrique has the personnel at right-back to cope with his loss.

“Dani Alves has decided to leave,” said Fernandez is quoted by Sky Sports as saying. “It’s a personal decision that we respect.

“At right-back we have confidence in Aleix Vidal, he was signed for that reason. We also have Sergi Roberto.”

But Fernandez is adamant that Mascherano is going nowhere, describing the Argentine centre-back as a “vital player”, and promised that Neymar will remain at Barcelona for “many years to come”.

“I don’t have the slightest doubt that Mascherano will stay here,” Fernandez is quoted by Sky Sports as saying. “He is a vital player.”

“Neymar will continue,” he added. “He will be here for many years to come.”

Mascherano joined Barcelona from Liverpool in 2010 and looks poised for a seventh season with the Catalan club, for whom he has been increasingly important since moving to centre-back.

Neymar is an integral part of the most prolific front three in the world and appears set to stay that way despite Sky Sports claiming long-term interest from Manchester United.