Is this Mousa Dembele putting on the charm offensive on behalf of Tottenham Hotspur?

The Spurs midfielder was getting pally with two players who are reportedly on Mauricio Pochettino’s radar ahead of the summer transfer window – Belgium teammates Michy Batshuayi and Axel Witsel.

Dembele uploaded this Instagram picture of the trio on set of a photoshoot ahead of Euro 2016. The Spurs fans in the comment are hopeful he brings them both back to White Hart Lane with him! 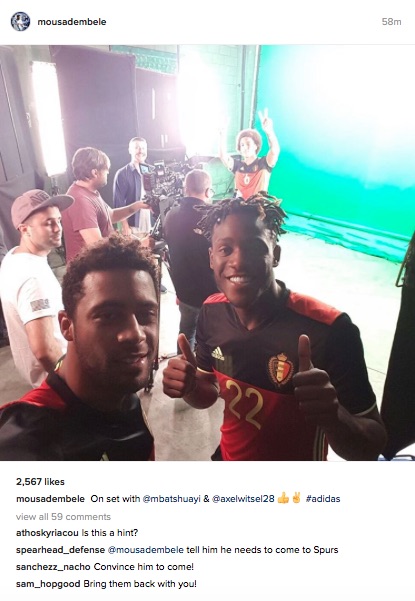 Sky Sports reports that 22-year-old striker Batshuayi will leave Marseille imminently and is a target for Spurs, who have been linked with a £20m move for Zenit St Petersburg, according to The Sun.

Tottenham have three players in Belgium’s Euro 2016 squad – Dembele, Toby Alderweireld and Jan Vertonghen – which will stand them in good stead if they pursue Batshuayi or Witsel this summer.