The clever people at CIES Football Observatory have conducted a study to discover the world’s most valuable footballers, using a complex mathematical formula.

We didn’t need Good Will Hunting to tell us that Lionel Messi, Neymar and Cristiano Ronaldo are the top three, but there are some very interesting findings below that.

The study concluded that Tottenham Hotspur striker Harry Kane was the most valuable player in the Premier League, and fifth most valuable in the world at €112.5m (£87.8m). 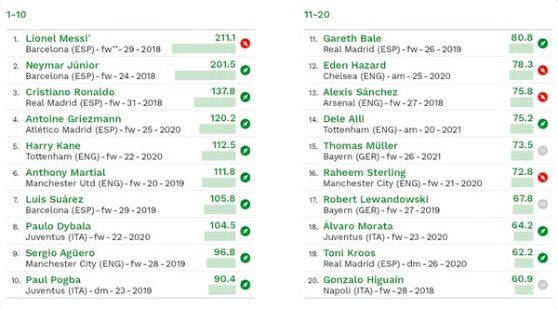 Dybala’s Juventus teammate Paul Pogba (€70.6m) completes the top 10. The Frenchman is expected to be one of the hottest commodities in this summer’s transfer window, but won’t come cheap!

Chelsea and Arsenal are also represented in the top 20 through Eden Hazard and Alexis Sanchez, although the Football Observatory says that their values have dropped over the last 12 months.

Raheem Sterling makes it three English players in the top 20. His value has, somehow, allegedly risen to £56.8m from the £49m that Man City paid for him last summer – fee reported by BBC Sport.

The Football Observatory use complicated algorithm, which takes into account factors such as performance, age, contract length and international status to make their calculations.