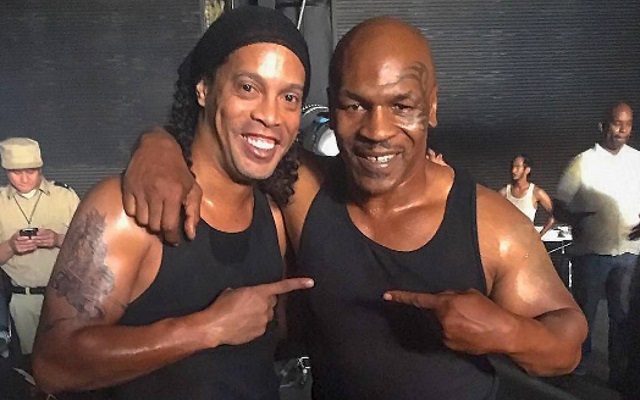 Photos from the filming of the new Kickboxer movie—starring Ronaldinho and Mike Tyson—have emerged on Instagram.

The series of images—shared by UFC fighter Fabricio Werdum on his Instagram account—have shed light onto the upcoming Kickboxer: Retaliation movie, which looks set to be fantastic.

Mike Tyson and Ronaldinho on the set of Kickboxer: Vengeance Brazilian soccer star Ronaldinho and former heavyweight champion Mike Tyson took time out of their filming schedule to pose for a picture on the set of the movie Kickboxer: Vengeance. The pair signed up for what will be the second part of an upcoming rival of the 1989 movie starring famed Belgian martial artist Jean-Claud Van Damme. #miketyson #ronaldinho #boxing #soccer #legends #legend #film #movie #jcvd

The movie is the next in line of the magnificent Kickboxer franchise, which began in 1989 with the original Kickboxer—a classic martial arts movie starring the iconic action hero Jean Claude Van Damme.

Even the great man himself can’t quite compete with the star power set to feature in the latest line in the saga—due for release next year.

Van Damme makes his return, alongside the likes of Tyson, Ronaldinho and Werdum.

SEE MORE:
Barcelona transfer news
Footballers on Raya: Instagram babes use new app to hook-up with Prem stars, ‘half of Arsenal’ are on it with CRINGE photos

We can’t see Ronny coming out of that tangle too well…but we can’t wait to see the result!