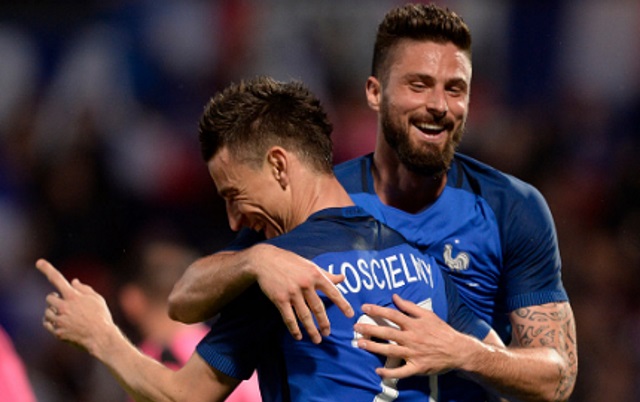 Arsenal striker Olivier Giroud set France on their way in their final friendly match ahead of the European Championships as his strike set Les Bleus up for a 3-0 victory over lethargic Scotland at is off to a great start in the club’s pre-Euro tuneup game against Scotland at the Stade St-Symphorien on Saturday.

It took just eight minutes for the Euro 2016 favourites to open the scoring when Giroud backheeled Les Bleus into the lead with a fine backheeled goal.

The Arsenal star added another 27 minutes later before his club teammate Laurent Koscielny added a third and killed off the match as a contest.

Koscielny scores to make it 3-0 to France! Haha, Arsene must be happy pic.twitter.com/XPAmE3WUR8

Scotland—the only home nation not to secure a spot at Euro 2016—struggled to find a way back into the contest and the French saw out the second half as Didier Deschamps reshuffled his pack, opting to give a number of his squad players the run out.

The comfortable victory will have given the French a much-needed morale boost ahead of their Euro opener against Romania in Paris on Friday June 10.

The likes of Lassana Diarra, Karim Benzema and Raphael Varane will all be missing for various reasons, and in their absence, goalscoring Giroud and the impressive Paul Pogba have demonstrated that they can step up and be potential match-winners.