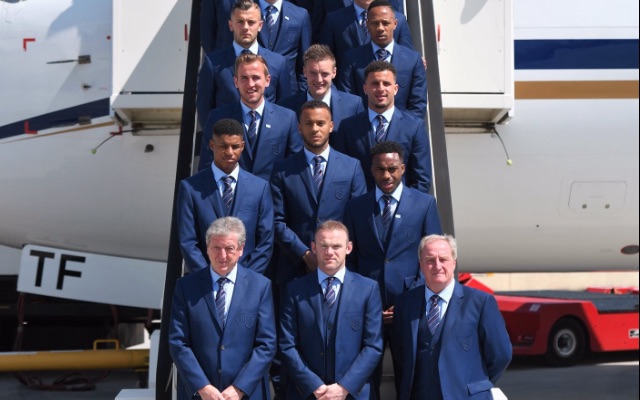 Roy Hodgson and the England boys jetted off to Marseille for their Euro 2016 campaign this lunchtime.

And the traditional squad photo was taken as they prepared to board their plane at Luton Airport.

All of the players have been busy preparing for the tournament, but none perhaps have had a more hectic weekend than Jamie Vardy as he ponders over staying at Leicester City or moving to Arsenal.

SEE MORE: Arsenal to land Jamie Vardy on big-money contract in next 24 hours

According to BBC Sport, the Foxes striker will make a decision on his future before taking flight, and his expression in the England squad photo suggests that he is delighted with the choice he has made.

Vardy, centre of the picture, is one of only several Three Lions who treat us to a beaming smile. That is the face of an excited man, not one who is burdened with confusion or regret.

But is that because he has agreed to a blockbuster switch to the Gunners, or because he is at peace with having opted to stay with the Premier League champions? Only time will tell…

Much of the rest of the England squad look thoroughly fed up to be going to France. Perhaps they have just found out that Hodgson has been put in charge of the in-flight entertainment.