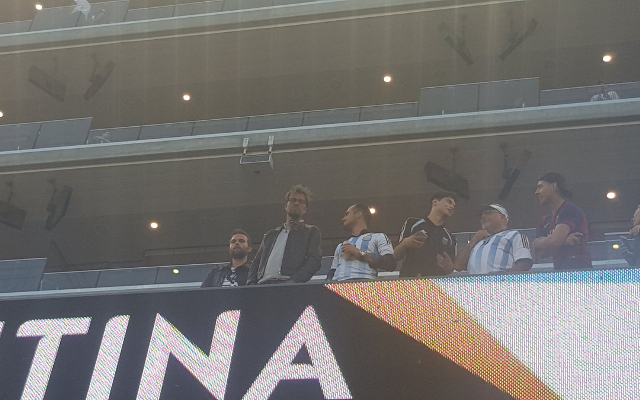 Liverpool manager Jurgen Klopp was seen at Argentina’s Copa America clash with Chile at the Levi’s Stadium on Monday night, with many insisting he was there to watch Gonzalo Higuain.

What is clear at this stage is that the German tactician was present at the game, and those in attendance pictured him leaving his seat shortly after Higuain was substituted.

In turn, that has naturally led to conclusions that he was there to watch the Argentine forward, with BeIN Sports reporting on Monday that the Premier League outfit were keen on signing the Napoli star.

Jurgen Klopp left two minutes after Higuain was taken off. Make from that what you will. pic.twitter.com/JxNfX3wdp4

However, where the confusion lies is over who Klopp was at the game with, with conflicting reports suggesting that it was Higuain’s brother and agent, Nicolas, while others have contested that it was Klopp’s son, Marc.

The images below show who the Liverpool boss was sat with, but it hasn’t been enough for anyone to verify whether or not it was in fact Nicolas.

If that was the case, then it is certainly the biggest indication yet that the Reds are looking at pulling off a sensational move for a striker that scored 36 Serie A goals last season.

For some, the move might seem like a strange one from Higuain’s perspective given that he will feature in the Scudetto race as well as the Champions League next season, but the draw of playing in the Premier League and at Anfield can’t be dismissed.

As a result, it remains to be seen how the situation develops in the coming weeks and months, as it’s unlikely that anything will be discussed until Argentina’s participation in the Copa America comes to an end.

Juergen Klopp was at Argentina v Chile last night with Gonzalo Higuain’s brother. Then left when he was subbed on 75 minutes. Liverpool fans should get very excited!!! ? ? ?? #higuain #liverpool #klopp