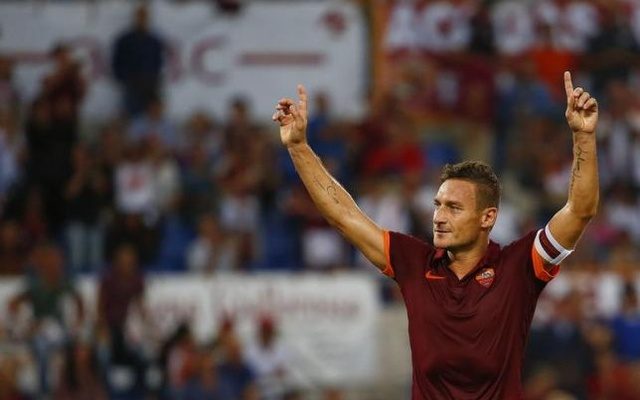 Roma are expected to officially confirm that they have reached an agreement over a contract extension with club legend Francesco Totti.

The 39-year-old met with club President James Pallotta on Tuesday, and both men were all smiles as they came out of the meeting which lasted around 45 minutes, as reported by La Gazzetta dello Sport.

It is expected that details of the new contract will be confirmed when the stock exchange closes on Tuesday evening, with Totti likely to have put pen-to-paper on a new one-year deal.

“I’ve signed for three years!” Totti joked with reporters after the meeting.

“Am I happy? You’ll have to ask the President…”

The veteran endured a tough campaign last season, with injuries and lack of form holding him back as well as a falling out with coach Luciano Spalletti after he returned to the Stadio Olimpico in January.

However, Totti ended the year with five goals and four assists as he played an integral role in Roma’s third-place finish in Serie A, thus securing a chance of Champions League football next season.

Given his popularity with the supporters and his desire to continue playing for the club that he has represented for over two decades now, it will be a welcome announcement when it arrives to confirm that the Giallorossi faithful will see their hero continue for another year.

Furthermore, it’s also a treat for Serie A fans in general, as despite his allegiance to the capital club, many across Italy will respect his achievements and loyalty over the years and the undoubted quality that he has displayed on the pitch time and time again.