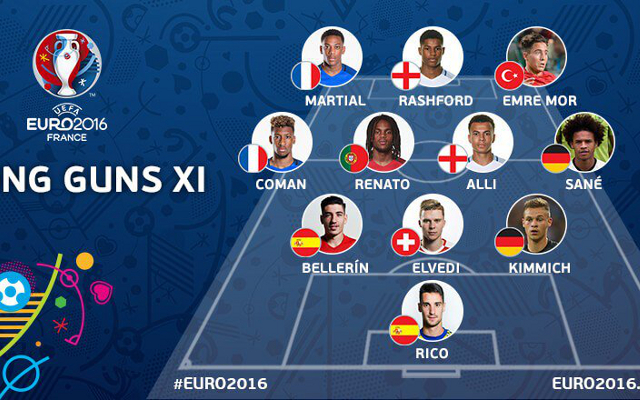 UEFA have announced their ‘Young Guns XI’ ahead of Euro 2016, with some exciting talents set to be on display in France this summer.

As ever, all 24 participating nations will hope that they have struck the right balance when it comes to giving youth a chance while relying on experienced veterans to guide them through the tournament.

Nevertheless, it’s always the youngsters that produce a shock that grab the big headlines for their performances, something that Manchester United striker Marcus Rashford knows all about after his impact for the club this past season.

While he’ll hope to take that form to France and be given a chance by Roy Hodgson, his United teammate Anthony Martial will be under pressure to deliver for the hosts after enjoying a great first season at Old Trafford.

In turn, it’s no surprise to see him included too with new Dortmund signing Emre Mor forming an attacking trident as the Turkey international looks to continue his impressive rise in the coming weeks.

Elsewhere, Dele Alli and Hector Bellerin also form part of the Premier League contingent, while Renato Sanches will hope to be given a chance to show why Bayern Munich splashed the cash for him this summer.

Kingsley Coman has already rewarded the Bavarian giants for their faith with his form over the past year, while the likes of Sergio Rico, Joshua Kimmich, Nico Elvedi and Leroy Sane will all be pushing their international teammates for a spot in their respective starting line-ups over the course of the tournament.

Many will be restricted to trying to make an impact off the bench, and it will certainly be intriguing to see which individuals are able to have the biggest influence this summer in what should be an excellent tournament in general.