In CaughtOffside’s latest prediction piece ahead of Euro 2016, our writers pick who they think will take home the Golden Boot prize for being the top scorer in France this summer.

A certain Germany star is viewed as the overwhelming favourite in the COS office, but there are also shouts for two Real Madrid superstars, and a rival from across the Spanish capital…

“The guy loves the biggest stage, and will pip Alvaro Morata to the Golden Boot.”

“Although he might be considered a ‘safe’ bet, given Germany will make a deep run and coupled with Muller’s track record at international tournaments, it wouldn’t be a surprise if he tops the charts.”

Josh, our social media guru, is used to limiting his opinion to 140 characters or less. Here, he only needs 19. 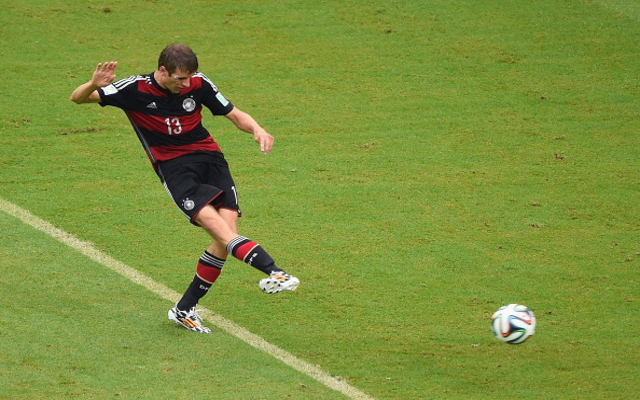 Jonathan and Ed feel that Ronaldo could have the Golden Boot wrapped up by the close of Group F.

“Strong goal hauls in the group stage can go a long way to deciding who wins the top scorer gong, and CR7 will be licking his lips at the prospect of facing Austria, Iceland and Hungary in the opening round. He bagged 16 goals in the Champions League this year – one off his own personal best – and will be desperate to taste some glory with the Seleccao das Quinas.”

“Muller is a proven goalscorer and, if Germany go far, he will be frequently on the scoresheet.”

While his Turkish-Football colleague Eren is also backing Muller, Emre believes that Gareth Bale could take his inspirational qualifying form into the finals for Wales.

“Bale has been unstoppable for Wales and is coming off the back of Champions League glory.”

“The top scorer this summer almost certainly will be Thomas Muller. If Germany go all the way, as I suspect they will, then Muller will unquestionably be key. Despite being neither a striker nor a No.10, the Bayern Munich star has an unbelievable knack for being in the right place at the right time and has an excellent record in big competitions. Germany don’t have a recognised top-class striker – with Marios Gotze and Gomez their only options up front – so Muller will be a vital source of goals.”

“I expect Harry Kane to perform well, but England won’t be in the competition long enough for him to win the Golden Boot. France could go all the way and Griezmann has been in superb goalscoring form for Atletico Madrid this season.”