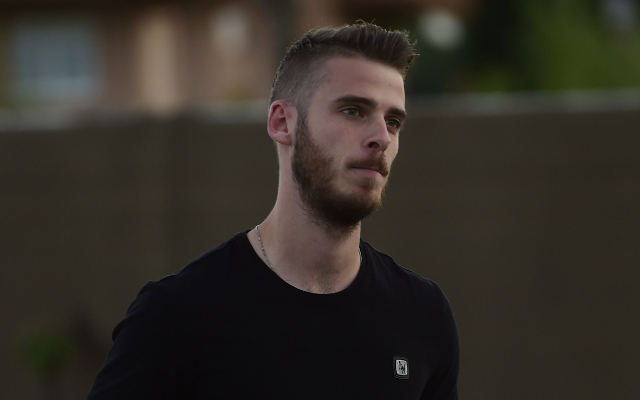 Spain goalkeeper David de Gea addressed the media on Friday evening, and insisted that all the accusations about him being reported were completely false.

The Manchester United star has been implicated in an investigation into pornographic businessman ‘Torbe’, with a protected witness naming him specifically along with Iker Munain and another footballer.

It was alleged that he set up a meeting where the witness was forced into having a sexual encounter with two footballers as reported by El Diario, but he wasn’t involved in the actual assault itself.

Nevertheless, the Spaniard was at risk of severe punishment as a result of the accusations, but given nothing has been proven, he remains with the squad in France ahead of Euro 2016 despite reports in the media that he had been sent home.

While a press conference was initially scheduled for Friday evening for De Gea to address the media, there was a change as Aritz Aduriz and Hector Bellerin attended instead as initially expected.

However, shortly after, the 25-year-old did speak with reporters and as noted by Gulliem Balague, he strongly denied any wrongdoing.

It remains to be seen what now comes of the situation and whether or not there are any further developments in the coming days.

At the moment, De Gea is innocent until proven guilty, and Spain coach Vicente Del Bosque will continue to try and keep his squad focused on the matter at hand with their opening game of the tournament set for Monday against Czech Republic.

De Gea: “I feel even stronger about staying with the national team… it is all false and it is in my lawyers hands”

De Gea: “I never thought about leaving. It gives me more strength to train even harder”

De Gea: “I am a quiet guy and it is difficult that something affects me. And when something is false more reasons not to be affected”

De Gea: “I know what I have done with my life. It is all false”