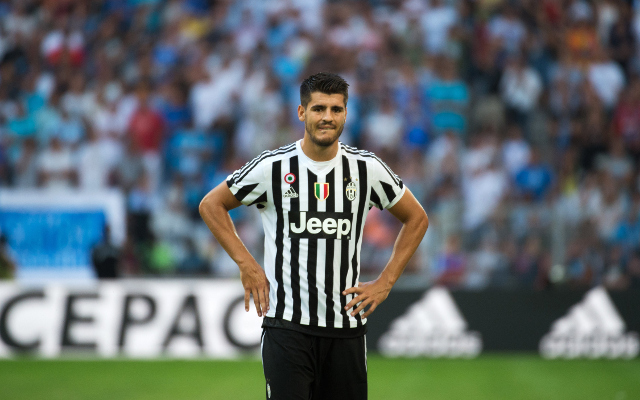 Manchester United are reportedly lining up a bid for Juventus striker Alvaro Morata, who is expected to return to Real Madrid this summer.

All talk about the Spanish forward’s future could be put on hold until after Euro 2016, as he will likely play a pivotal role in Vicente Del Bosque’s plans in France.

However, according to ESPN FC, United are ready to make their move, and they will now provide competition for both Arsenal and Chelsea who have previously been linked with the player.

Real are expected to exercise the buy-back clause in the 23-year-old’s contract with the Serie A champions, but it will be with a view of selling him on for a profit this summer.

In turn, that has led to speculation linking him with a move to England, and now it appears as though Jose Mourinho could be ready to significantly bolster his options in attack.

Morata scored 12 goals and provided 12 assists in 47 appearances in all competitions with Juve last season, helping the Bianconeri to a domestic double for the second season in a row.

His ability to score important goals in big games also saw him emerge as a fans favourite and an influential figure for Massimiliano Allegri, and ultimately, it’s no surprise that there is significant interest in him ahead of next season.

It’s no secret that United have been linked with a move for Zlatan Ibrahimovic this summer, but Mourinho will arguably need more up front with Marcus Rashford emerging as the club’s only real consistent striker last year.

Morata has of course previously worked with the Portuguese tactician during his time in the Spanish capital, and a reunion could be on the cards provided that he will have an important role at United and that is a key factor that will determine where he ends up later this summer.