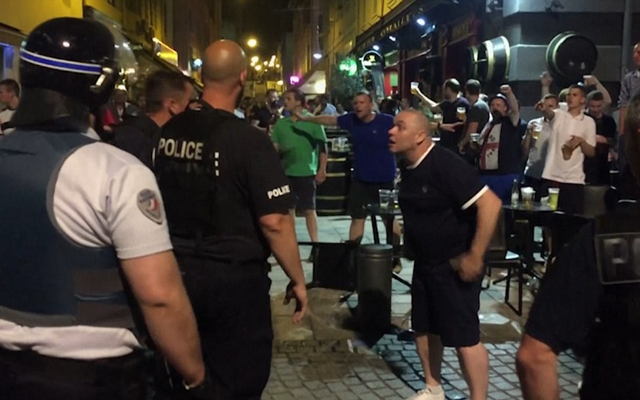 A small group of England supporters were at the centre of trouble in Marseille on Thursday night as they were involved in a brawl with locals.

French police were forced to use tear gas to defuse the situation, after local French youths reportedly attacked England supporters who had gathered together in the Old Port area.

According to The Daily Mail, the visiting fans were heard chanting: “ISIS, where are you?”, with the clashes leading to two individuals being arrested, one for assault on a barman and another for violent disorder.

Naturally, at this early stage there are conflicting reports over who started the trouble, with some England fans insisting that they were targeted by the locals for no reason after being well behaved in the presence of the French police throughout the day.

Others have suggested that it was sparked by a local man receiving abuse from the visitors while it is also claimed that the chanting regarding ISIS was seen as an insult given the large Muslim population in Marseille, although nothing has been confirmed at this point despite being reported by the Mail.

What is clear though is that the ugly scenes in Marseille are not the start to Euro 2016 that the majority would have wanted to see, and although it was a small group involved in the trouble, it is still a disappointing sight to see things get violent.

The French authorities certainly have enough on their minds for the tournament in terms of security both at matches and around the country for the next few weeks, and so they could do without having to deal with situations such as those seen on Thursday night.