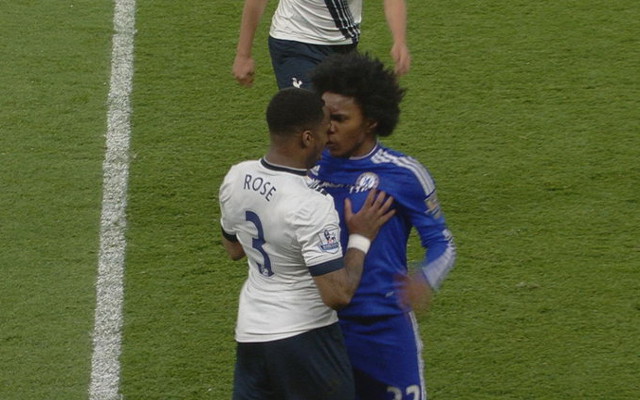 Though not considered one of the traditional London derbys, let alone a major Premier League rivalry, the Chelsea-Tottenham Hotspur rivalry was taken to a new level this past year during a May 2nd match at Stamford Bridge.

Spurs star Danny Rose, who got involved in a shoving match with Chelsea ace Willian during the game, said that the rivalry has reached new heights and new levels of ‘hatred’ from fans and players alike.

“That’s now  the first fixture we’re looking at next season,” Rose said, per The Sun. “Chelsea at home and Chelsea away.

“To feel the hatred from the Chelsea fans and  players before that game — it was amazing.

“I’ve apologised before on behalf of Tottenham  for what happened in the game but  I wouldn’t change anything apart from the result.

“How we fought for each other, we’ve shown we are not a pushover. This is why I play football — games like that.”

The match in question, sometimes referred to as the ‘Battle of the Bridge’ for the fighting that took place on and off the pitch, featured Chelsea overcoming a 2-0 deficit to tie the game against Tottenham and deprive the Spurs of their last chance to stave off Leicester City in the Premier League title chase. After Eden Hazard scored in the final 10 minutes of the match, the resulting 2-2 draw delivered the title to the Foxes.

The game involved 12 yellow cards and an infamous melee where Chelsea manager Guus Hiddink was knocked down, and eye-gouging was caught on tape.

The brawl led to a six-game ban for Spurs star Moussa Dembele and a grand total of £600,000 in fines.