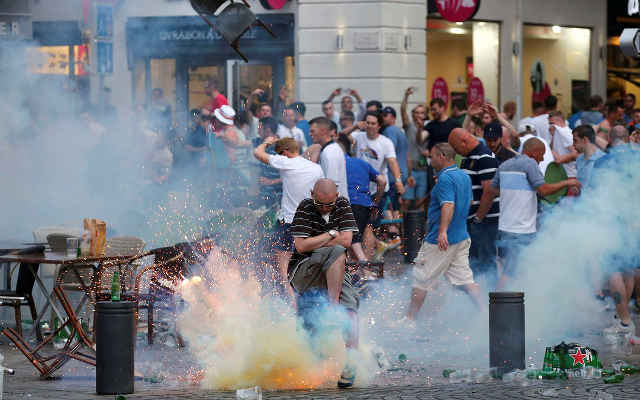 UEFA have announced that England and Russia could be disqualified from Euro 2016 if their supporters continue to be involved in violence.

The two groups of supporters were involved in violent clashes in Marseille on Saturday night, both inside and outside of the Stade Velodrome with the two nations playing out a 1-1 draw in their Group B encounter.

Ugly scenes have marred the tournament for the last three days now, with numerous arrests and injuries being reported.

Conflicting reports have placed blame with both parties and others including locals who have also been involved in the incidents, but UEFA have now released a statement on the matter and have warned both sets of supporters about their conduct moving forward.

A UEFA statement said: “The UEFA Executive Committee would like to express its disgust for the violent clashes which occurred in the city of Marseille.

“Such unacceptable behaviour by so-called supporters of the national teams of England and Russia has no place in football, a sport we must protect and defend.

“The UEFA Executive Committee has warned both football associations that – irrespective of any decisions taken by the independent disciplinary bodies relating to incidents inside the stadium – it will not hesitate to impose additional sanctions on the Football Association (FA) and the Russian Football Union (RFU), including the potential disqualification of their respective teams from the tournament, should such violence occur again.

“We urge both the FA and the RFU to appeal to their supporters to behave in a responsible and respectful manner.

“We would also like to publicly voice our support for the work of the French authorities and security forces for their efforts to deliver a safe and secure tournament in challenging circumstances.”

Supporters will be within a near proximity of one another for the next week or so as the group stage plays out, and that in turn represents a threat of more violence breaking out.

French police have used tear gas and water cannons to disperse crowds and try to prevent confrontations, as it all comes at a time when tensions are high in the country give the current climate in France following the terrorist attacks in Paris last year.

In an ideal world, the supporters will all heed the warning and refrain from further violence, but it’s unlikely to be as simple as that as it remains to be seen whether or not UEFA follow through on their threat.