BIG WES HAS JUST SCORED A BEAUTY! THAT OUGHT TO SILENCE THE BULLIES!

Wes Hoolahan vs Zlatan Ibrahimovic was getting people very excited way before kick-off in Paris tonight.

Let’s be honest, Wes Hoolahan (king of the crayons) vs Zlatan Ibrahimovic has to be the highlight of #EURO2016 #ncfc pic.twitter.com/LdneHaStdU

And once Ireland vs Sweden got underway, the much-anticipated head-to-head did not disappoint.

And apparently this is really funny.

SEE ALSO:
Watch another brilliant Eric Dier free-kick for England
Five faces that prove new Reading boss Jaap Stam is the scariest manager in football
Joachim Low caught on camera touching and smelling his own genitals while on Euro 2016 duty with Germany 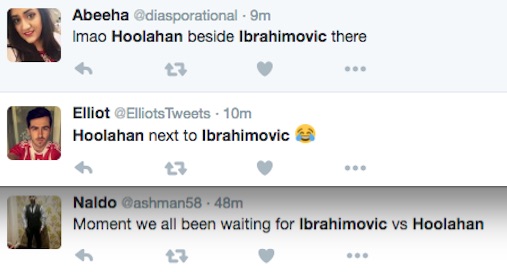