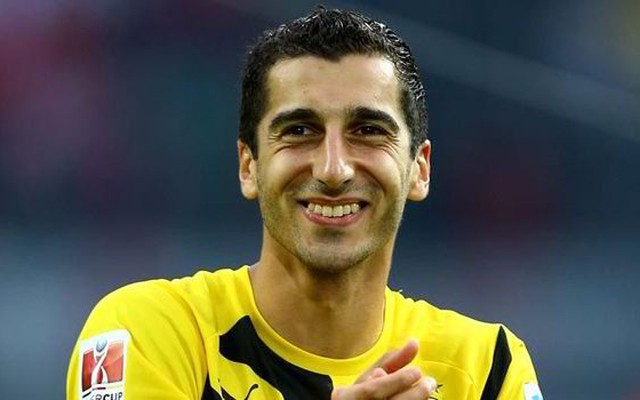 The agent of Dortmund playmaker Henrikh Mkhitaryan has revealed that his client wants a move to Manchester United and not Arsenal this summer.

Both Premier League giants have been linked with signing the Armenian international this summer, who has just one year remaining on his current contract with Dortmund.

While a renewal looks unlikely, it could force the Bundesliga outfit to consider a sale this year instead of losing him for nothing next summer, and in turn the interest is starting to hot up in acquiring his services.

Having scored 11 goals and provided 20 assists in the league last season, there’s no denying Mkhitaryan’s creative influence, and his agent has now revealed that he wants to take those talents to Manchester and join up with Jose Mourinho at Old Trafford.

“He wants to go to Manchester United and we are still trying to resolve the situation,” Mino Raiola is quoted as saying by talkSPORT.

“We are still talking to Dortmund. We are trying to be reasonable. They are aware that Micki wants to leave now.”

Mourinho has already made his first signing as United boss, bringing in defender Eric Bailly to add quality and depth to his backline.

However, he will likely prioritise boosting his options in the final third too ahead of his first campaign in charge, and Mkhitaryan certainly fits the bill in that regard.

The 27-year-old could now be the latest Dortmund player to leave the club this summer, following the likes of Ilkay Gundogan and Mats Hummels out of the exit door.

To Thomas Tuchel’s credit, he’s been active in the transfer market himself in bringing in the likes of Ousmane Dembele, Marc Bartra and Emre Mor, but he’ll certainly feel the loss of a player of Mkhitaryan’s quality while Mourinho will be the biggest winner if a deal is secured.