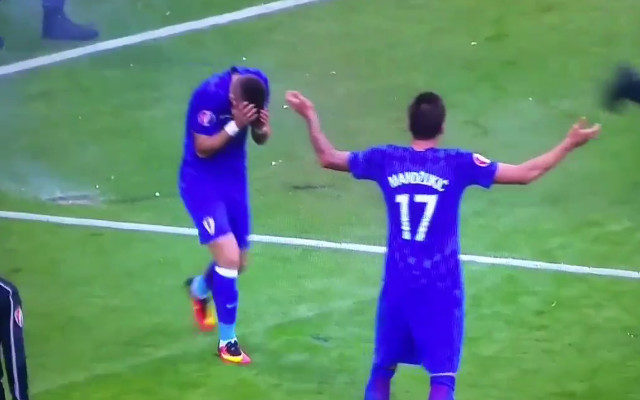 Does security at the stadiums in France need to get even tighter?

The craziness of Euro 2016 has reached yet another level as Croatian fans actually threw live flares onto the pitch during Croatia’s 2-2 draw against over the Czech Republic.

Croatian fans almost blinding their own players! Perisic hit too by the flare. Disgusting! #CZECRO pic.twitter.com/JtxMNHhheD

One of the flares actually blew up in a player’s face – not to mention a poor steward who was knocked backwards by the pop.

Mental scenes during #CZECRO as Croatian fans start throwing flares. One blew up in a stewards face. pic.twitter.com/sGJXt2qcM2

Not to take the part of a paranoid, but what if the objects thrown onto the pitch were far more nefarious? Something needs to be done to keep this from happening again. Right now.