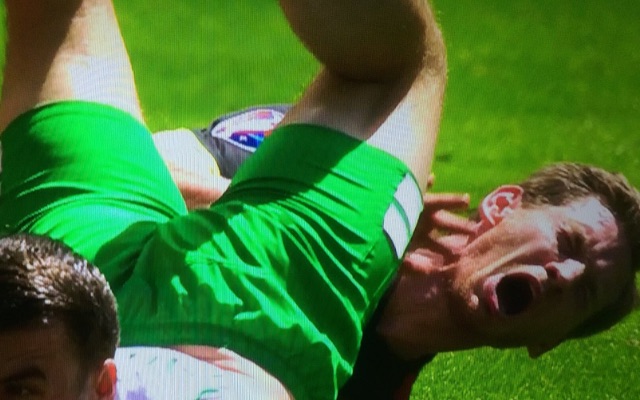 Spurs star Jan Vertonghen is a fine ball-playing centre-half – so much so that Belgium play him at left-back!

But the Tottenham man is also excellent when it comes to ‘cheating’.

Although not your traditional diver, Vertonghen has mastered Pepe’s dark art of face-holding and pain-exaggeration.

When your #EURO2016 is going to shit but you decide to take someone down with you #BELIRL ? pic.twitter.com/6fXC7sQRHu

And Vertonghen used those skills to great effect earlier this afternoon to steal a free-kick from the Republic of Ireland’s Seamus Coleman.

Midway through a goalless first half, the Ireland right-back appeared to have got the better of Vertonghen on the halfway line.

As Coleman tried to get away from Vertonghen, the crafty Belgian pulled the Everton man on top of him and then screamed for the referee, who gave him a free-kick, much to the vocal anger of the thousands of Irish fans in Bordeaux.

In fact, both men screamed for the ref’s attention – creating the hilarious slow-mo replay above – but Vertonghen was clearly much more convincing.

Belgium have dominated the first 45 minutes, but Ireland have hung on so far.

Both sides could really do with a win following their failure to pick up three points in matchweek one, when Ireland drew with Sweden in their opener and Belgium lost to Italy.