Reports overnight claimed that Adam Lallana was poised to miss out on a starting place for England’s last-16 clash with Iceland at Euro 2016.

According to The Guardian, Roy Hodgson is poised to hand Raheem Sterling a shock recall for this evening’s encounter with the minnows in Nice.

Sterling was widely panned for his displays in England’s opening two group matches, but Hodgson seems set to give the Manchester City winger another chance.

Liverpool midfielder Lallana has been carrying an ankle injury, as The Mirror reports, and that might be a factor behind Hodgson’s supposed selection.

But the 28-year-old has made a late plea to maintain his starting spot, an Instagram post of him in action with the caption: “Feeling prepared and ready for the game tonight”. 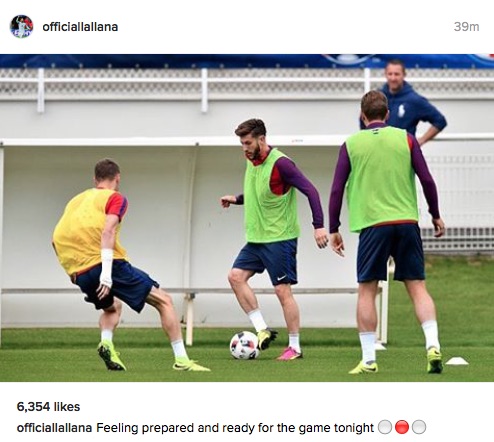 If that is a message to Hodgson that he is fit and raring to go, let us hope the England boss is paying attention if the alternative is Sterling on the left wing.