This Michy Batshuayi letter, published on the Belgian striker’s Twitter account on Saturday night, confirmed that he was leaving Marseille.

According to the statement, which we have translated into English below, Batshuayi’s departure from the Ligue 1 club will be sealed on Sunday.

Chelsea have been widely linked with a summer move for the 22-year-old, with Sky Sports reporting earlier this week that he had passed a medical ahead of a move to Stamford Bridge. 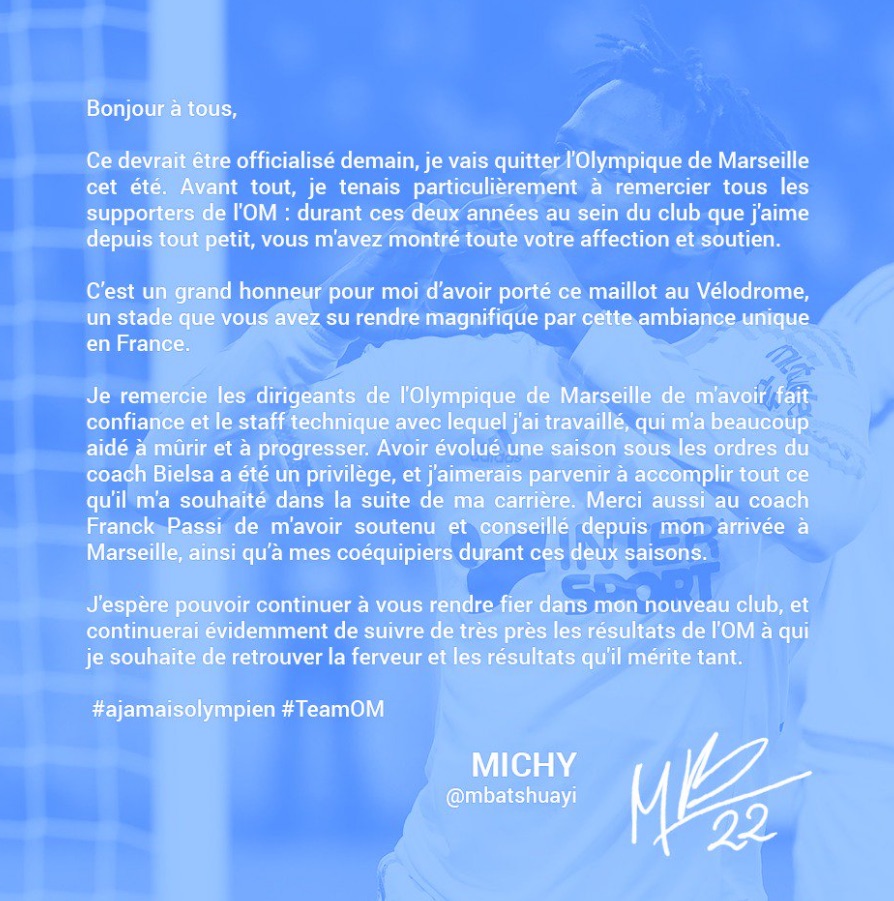 SEE ALSO:
Chelsea midfielder targeted by Euro giants with extra £45m to spend
Antonio Conte reassures Chelsea duo that they have future at Stamford Bridge
Chelsea star critical of coach after Belgium crash out of Euro 2016

“It will be made official tomorrow, I will be leaving Olympique Marseille this summer.

“Above all, I particularly want to thank all the supporters of OM: during my two years with the club I have loved since I was young, you have shown me your affection and support.

“It’s a big honour for me to have worn this jersey at the Velodrome, a stadium which you have made magnificent with an atmosphere which is unique in France. I thank the directors of Olympique de Marseille for having confidence in me and the coaching staff who have helped me progress.

“Developing for a season under coach [Marcelo] Bielsa was a privilege and I would love to achieve what he has wished for me in the remainder of my career. Thanks also to coach Franck Passi for having supported and advised me since my arrival at Marseille, and my team-mates for these two seasons.

“I hope I can keep making you proud with my new club, and will continue to follow closely the results of OM. I hope the club can recover the results they deserve.”

Batshuayi scored 17 goals and provided nine assists in 36 Ligue 1 games last season. He scored once in two substitute appearances for Belgium at Euro 2016.