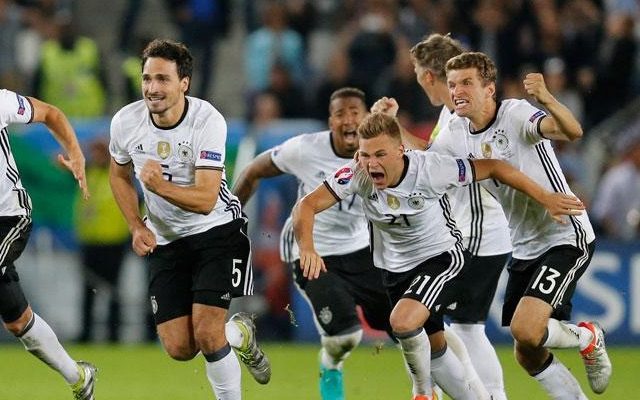 Thomas Muller became the first player to fail from the spot penalty in a shootout for Germany since 1982 on Saturday night.

The Bayern Munich star, who has yet to score at Euro 2016, saw his effort saved by Italy goalkeeper Gianluigi Buffon, before Mesut Ozil and Bastian Schweinsteiger missed their spot kicks.

Ozil hit the woodwork and Schweinsteiger was way off target, but Germany somehow managed to scrape through 6-5 after the game had ended 1-1 in 120 minutes.

Italy were second best on the night, but not by much.

The Azzurri looked to be heading out in normal time thanks to Ozil’s 65th-minute opener, but a penalty conceded by Jerome Boateng got Italy level.

Leonardo Bonucci, who would later see an effort saved in the shootout, beat Manuel Neuer with a fine strike after Boateng had handled the ball unnecessarily.

In extra time, Italy killed the contest and played for penalties.

They got their wish, but were foolish to take on the Germans at their own game – Germany have contested seven penalty shootouts at major tournaments now, winning six.

Germany’s reward for edging through to the semi-finals is a last-four clash in Marseille against either hosts France or overachievers Iceland.

That game will take place on Thursday, with the final against either Portugal or Wales, three days later in Paris.

Germany are the reigning world champions, but they have not conquered European football since 1996.