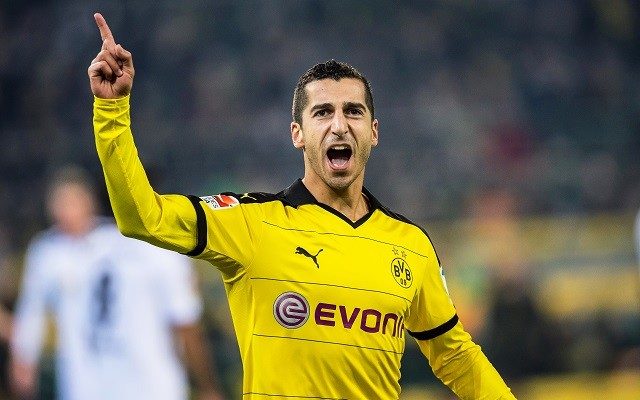 Manchester United are expected to wrap up the transfer of Borussia Dortmund star Henrikh Mkhitaryan this week, and it will certainly cost them.

The Bundesliga outfit took to their official Facebook page last week to confirm that an agreement had been reached, and now it is a matter of waiting for United to make it official and unveil their new star.

According to Bild, the Premier League giants will spend €42m on the transfer fee to sign the Armenian international, but that isn’t where the money stops.

United will reportedly hand Mkhitaryan an €8m signing on bonus, along with a €12.5m-per-season salary, which in turn means that the full investment in the playmaker will be around the €100m mark.

If true, that is a lot of money for the 27-year-old, and United boss Jose Mourinho will certainly be hoping that he delivers and repays the faith shown in him by the club.

On the basis of his displays last season, it should prove to be a wise investment given that he contributed 23 goals and a staggering 32 assists in 52 appearances in all competitions.

If Mkhitaryan can bring that level of creativity to Old Trafford and play a pivotal part in Mourinho’s rebuild, then it will likely be seen as a solid signing regardless of the figures involved although naturally there will be an anxious wait to see how he adapts to the Premier League.

Furthermore, if there is truth behind the numbers, then it will undoubtedly put a lot of pressure on the player’s shoulders to prove that he’s worthy, while all concerned will likely be irritated that the figures have somehow become public knowledge.

United appointed Mourinho as Louis van Gaal’s successor last month, and the Portuguese tactician has certainly asked the club to open up their chequebook having also signed Eric Bailly and Zlatan Ibrahimovic already this summer.