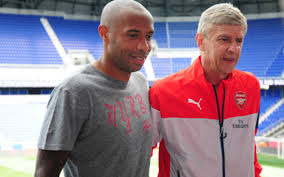 After it was confirmed on Tuesday that Thierry Henry would be leaving his position in the Arsenal youth set-up, it led to a passionate reaction on social media from the club’s supporters.

The 38-year-old had been balancing his coaching role with his duties as a Sky Sports expert, and ultimately it has led to a situation where Wenger asked him to pick between the two.

Having revealed his desire to continue on Sky, Wenger has made the decision to rescind the offer to Henry to continue working within the club.

High-profile fan Piers Morgan was unsurprisingly amongst the most vocal, insisting that he was “disgusted” by the news.

Other supporters defended Wenger for his decision, as ultimately they agree that if Henry was serious about his coaching career at Arsenal, he would have quit his Sky position.

Many will see the other side of the argument, but ultimately it looks as though the Frenchman will continue with his punditry at the detriment of a possible long-term coaching future in north London.

So disgusted by Arsenal manager’s treatment of Thierry Henry.
Thierry will now go to a rival club to coach their young players.
Ridiculous.

@piersmorgan @WoodmanGav If he’d rather be a pundit then it’s probably for the best. Wenger just asking for commitment the job needs.

Wenger is 100% correct. If Thierry Henry wants to be a football coach & future manager he has to be fully committed. https://t.co/PQlGLaOTEL

This means that to progress in his managerial pursuit, Thierry Henry will have to coach at another club, most likely a rival one. #afc

Arsène Wenger > Thierry Henry
Not even a debate, it’s as simple as that.

Wenger has never liked anyone who could challenge him, Arsenal is a dictatorship, he is the leader, the AKBs are his followers!