Alberto Moreno; can’t defend with him, can’t attack without him.

Last season, Liverpool suffered with the dilemma of having arguably the best attacking full-back in the Premier League, who was often a liability when doing his primary job.

His defensive displays have prompted Jurgen Klopp into the market for a new left-back this summer, with Leicester City’s Ben Chilwell the top target, according to the Metro.

But Moreno’s dynamic offensive display in last night’s 5-0 pre-season friendly thrashing of, albeit, Fleetwood Town, has made some Reds fans reluctant to lose the Spaniard.

And a couple of his Instagram followers have come up with a potential solution for Moreno, who uploaded a picture of him in action at Highbury – a move further upfield! 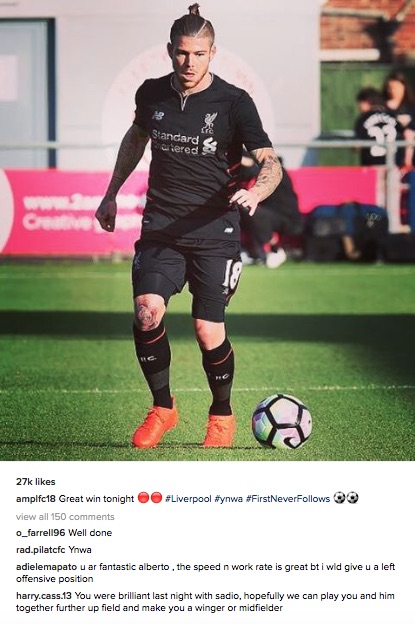 Could the 24-year-old be converted into a left winger? Possibly. The strength of his game is undoubtedly going forward, and he would offer a natural width on that flank.

But Liverpool have no desperate need for another option in that area as they already have plenty of versatile attackers. A better solution – teach Moreno to bloody defend.