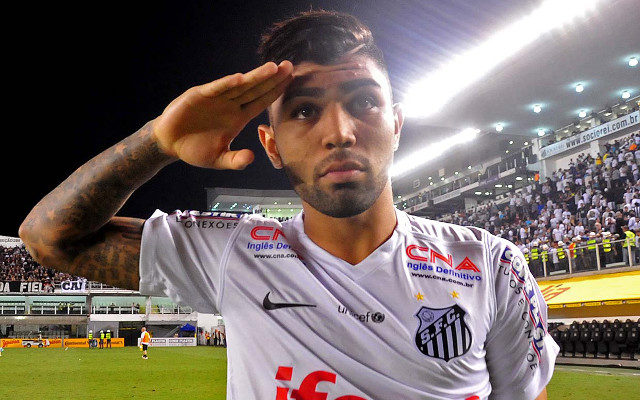 Santos striker Gabriel Barbosa has taken to Instagram to suggest that he could be nearing an exit from the club with Barcelona and Juventus closing in.

After scoring in his side’s 3-1 win over Ponte Preta, the starlet kissed the club’s badge that was emblazoned on the sidelines before posting this message on Instagram after the game.

“My heart is Alvinegro and it will always beat for you. Santos are my life. I will love you until death.”

In turn, it has led to further speculation that the 19-year-old is set to leave Brazil for Europe this summer, although it remains to be seen where his next destination is.

According to La Gazzetta dello Sport, Juventus remain in pole position to sign him and general director Giuseppe Marotta will now look to convince Santos to agree to a deal worth around €18-20m.

However, Barcelona are said to have sent scouts to watch ‘Gabigol’, and firmly remain in contention to sign him to bolster their own forward line, and thus present him with a difficult decision in terms of which European giant to join.

Nevertheless, it’s added that it will come down to Juve’s pursuit of Gonzalo Higuain, as if the Turin giants are successful in their bid to sign the Argentine striker, then they will pull out of the race for Gabriel.

In turn, that will open the path for Barca to swoop and add another exciting piece to their attacking options with Luis Enrique already boasting a trident of Lionel Messi, Neymar and Luis Suarez.

The teenager has scored four goals in nine league appearances so far this season, as he continues to build a reputation of being one of the most exciting talents in Brazil.