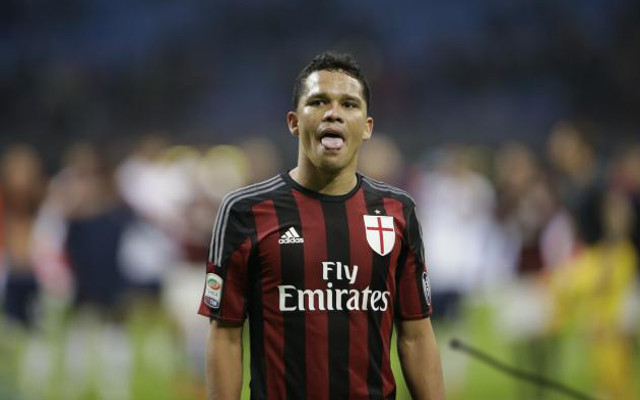 AC Milan have opted to leave striker Carlos Bacca out of their squad heading to the USA for a pre-season tour in the coming weeks.

The Colombian international scored 18 goals in his first season in Serie A last year, but speculation has suggested that he faces an uncertain future at the San Siro given his desire to feature in the Champions League.

With the Rossoneri out of European competitions again this coming season, the Metro reported last week how the Gunners target could be looking for a move elsewhere this summer.

West Ham United have been heavily linked too, with the Hammers even suggesting that a transfer fee with Milan has been agreed and they are now awaiting a decision from the player.

We have agreed a fee with AC Milan on Bacca and he has said, he will tell us in the next 48 hours if he is coming!!

As reported by La Gazzetta dello Sport, despite quotes from the player on Thursday suggesting that he intends to respect his contract at Milan and will talk with the club, it appears as though he won’t be heading out to the US with his team-mates.

Mattia De Sciglio has also been left behind, and the club have since released a statement to explain why the pair will not feature Stateside.

“Milan have decided, at the request of Coach Vincenzo Montella, to apply to Carlos Bacca – who arrived in Milan on Thursday – and Mattia De Sciglio – arriving Thursday July 28 – the same criteria as used for Gianluca Lapadula and Leonel Vangioni.

“For that reason, Bacca and De Sciglio will do all their preparations at Milanello, having been left out – for these reasons and not for reasons related to the transfer market – of the list of players for the International Champions Cup for which Milan is expected in the USA.”

Nevertheless, given the level of transfer speculation surrounding Bacca in recent weeks, it seems more than a mere coincidence as West Ham and Arsenal will undoubtedly be keeping a close eye on matters.

Gazzetta add that the former have raised their offer to Bacca to €4.5m net per year in a four-year deal, and have already offered €30m to Milan.

Owner David Sullivan is expected to try and convince Bacca to make the move, and it looks as though they could be nearing a deal with Arsene Wenger set to be left disappointed if he indeed held genuine interest in the former Sevilla forward.

The Gunners need more firepower in the upcoming campaign with the likes of Olivier Giroud and Theo Walcott not delivering consistently enough, and given Bacca’s record at the top level, he would certainly seem to fit the bill.

From a Milan perspective, with takeover talks continuing to be delayed this summer, selling Bacca would give Vincenzo Montella transfer funds to go out and strengthen the squad ahead of his first campaign in charge of the Rossoneri.