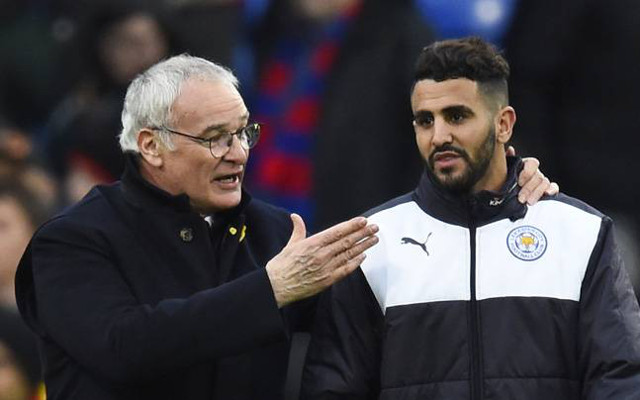 Leicester City manager Claudio Ranieri has revealed that he’s ‘confident’ that winger Riyad Mahrez will not leave the club this summer.

Having already lost influential midfielder N’Golo Kante to Chelsea, the Italian tactician will be desperate to keep the remainder of his squad in tact as much as possible.

However, according to a report by Eurosport France on Saturday, Mahrez has chosen a move to Arsenal and it was claimed that a deal was close to being agreed.

In contrast, Ranieri has insisted that he believes the Algerian international will stay with the Foxes as they prepare to defend their Premier League title and plot a way out of the group stages of the Champions League.

“I’m confident, of course,” Ranieri said when asked if Mahrez would stay, as reported by ESPN FC.

“We know very well there are other teams who must win the Premier League. We just have to defend it.

“I changed him [in the friendly against Celtic] at last because I said ‘okay, his job is done, it’s better to avoid injury.’

“I’m very happy, we have a very good dressing room. The players who came in are very good.”

Mahrez scored 18 goals and provided 10 assists in 39 appearances in all competitions last season, playing a crucial role in Leicester’s success which also saw him pick up the PFA player of the year award.

In turn, it’s no surprise that Ranieri would be desperate to hold on to the 25-year-old, as it would certainly be a major setback to see him leave and break up the prolific partnership that he enjoyed with Jamie Vardy last season.

A move to Arsenal is undoubtedly appealing given that it will more than likely offer Mahrez a better chance of competing for the Premier League title again as well as in Europe.

However, it would be refreshing to see him stay at the King Power Stadium and try to help Leicester repeat their stunning achievements from last year.