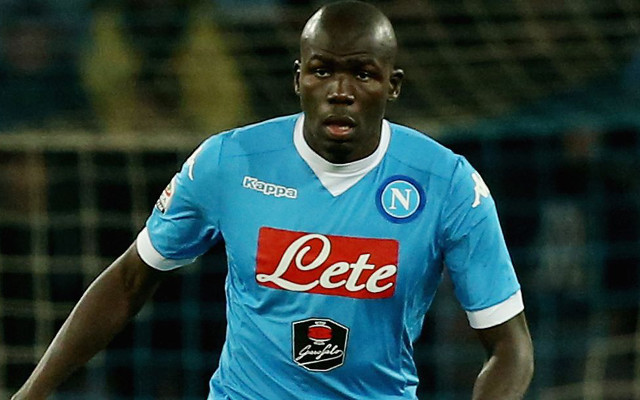 The agent of Napoli defender Kalidou Koulibaly has revealed that his client wishes to leave the club this summer, alerting Chelsea to the situation.

Antonio Conte has made signing a new defender one of his priorities this summer, and has previously been linked with making a move for the towering Senegalese international, as claimed by The Express.

Further, as reported by La Gazzetta dello Sport, it appears as though their pursuit is about to take a significant positive turn with the player’s agent revealing that Chelsea and Everton are the two possibilities.

Given the current uproar in Naples over a deal that will take Gonzalo Higuain to Juventus, Koulibaly’s agent was keen to insist that they will not be joining their domestic rivals or staying in Italy at all for that matter with the two more obvious choices presenting themselves.

“Let’s face it, I was in Dimaro [training camp] on Saturday, we took stock of the situation which has been quite tense in recent times. I’m not aware of claims we’re at a point of agreement, perhaps the club have understood that, but the desire of the player is still to go, not to renew,” Bruno Satin told Radio CrC, according to Gazzetta.

“The club tells us that he’s a great player but an offer hasn’t been made. Last year they wanted to sell him, they said he wasn’t focused enough, but then last season he showed all his qualities. He might decide to stay a year by inserting a clause in the contract, not as high as that of the Pipita [Higuain]. ”

“If Napoli want to keep him then they should make us other proposals, I can say for now that there are no margins to renew, I say to the fans to stay calm because he won’t go to Juventus, he won’t strengthen the competition. Chelsea and Everton are still interested, they’re looking for a central defender.”

The 25-year-old was a key member of the Napoli squad last season, playing an influential role in their second-place finish in Serie A as he featured in 33 games in the league.

Having proven his class with his aerial ability, strength, pace and reading of the game, he has certainly emerged as one of the top defenders in Europe, and so it comes as no surprise that Napoli would prefer to keep hold of him.

However, should they fail to reach an agreement, it seems as though both Chelsea and Everton are well placed to take full advantage, and it remains to be seen whether or not Antonio Conte can convince him to become part of his revolution at Stamford Bridge as he desperately seeks to bolster his defensive ranks.