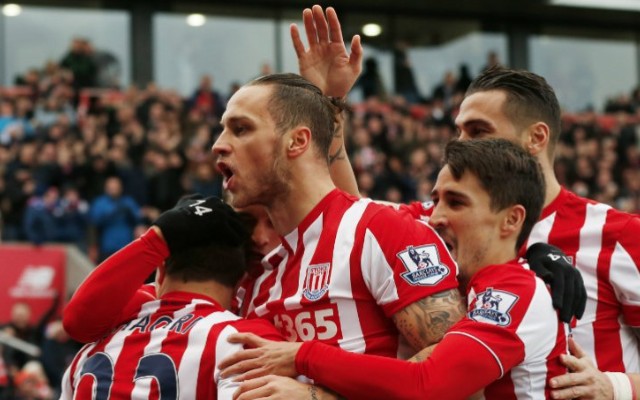 Everton have entered talks with Stoke City striker Marko Arnautovic according to the Daily Mail.

Per the source, the Toffees are set to activate the Austrian international’s £12.5 million minimum fee release clause.

Everton are planning to replace Oumar Niasse who they hope Galatasaray will sign with Arnautovic.

The powerful striker has just a year left on his contract with Stoke City but has failed to agree a new deal as the Potters have bee reluctant to meet his wage demands of £80,000 a week.

Everton meanwhile are also reported to be unwilling to offer the 27-year-old striker the wage packet he is after.

The disagreement over wages could ultimately result in Arnautovic pricing himself out of a move to Everton over the summer.

Everton boss Ronald Koeman is keen on strengthening his attacking lineup going into the new season as he is reported to be unhappy with Arouna Kone and Oumar Niasse.

Arnautovic would joined Romelu Lukaku at Everton – should he stay at the club over the summer – if he were to make the move.

SEE ALSO:
(Photo) Chelsea and Manchester City target drops massive hint as to where he sees his future
Everton star linked with shock return to Chelsea