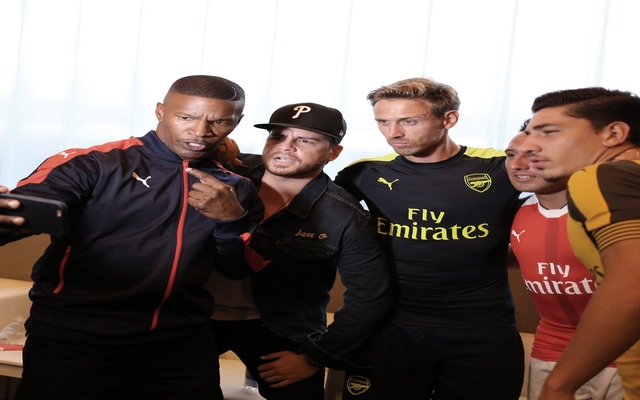 Arsenal launched their new away and third kits for the 2016/17 season at an event in Los Angeles on Friday, with H0llywood A-lister Jamie Foxx in attendance.

Santi Cazorla donned the new home kit which has already been revealed, with Hector Bellerin sporting the new away design while Nacho Monreal was picked to model the third strip.

Gunners legend Freddie Ljungberg was also at the event showing his support, and based on the reaction on Twitter thus far, the club’s supporters seem to be big fans of the new designs.

Arsenal are currently in the US as part of their pre-season tour, as they prepare to face Chivas de Guadalajara on Monday morning before returning home.

While Arsene Wenger continues to monitor his first-team’s progress this summer, he’ll also be expected to bring in new players to don the new Arsenal jerseys this coming season too.

Granit Xhaka remains the club’s only high-profile signing this summer, and with Per Mertesacker sidelined long-term with an injury, a central defender may well be on the agenda in the coming weeks.

Further, given their lack of a prolific goalscorer up front, Wenger will also be under continued pressure to add another striker, with Olivier Giroud and Theo Walcott ultimately failing to deliver consistently enough.

Nevertheless, while answers will potentially be provided in the next fortnight, Arsenal were left to enjoy their kit launch which saw Foxx show his love for the Gunners, as seen below in his tweet, as he will hope that the Premier League giants are a little more unpredictable this year.